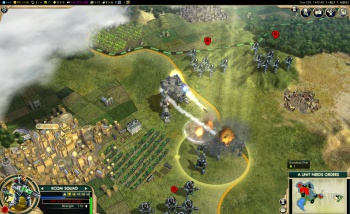 Civilization V has been out since the fall of 2010. For some of us, that means we've spent hundreds of hours marching units across continents and oceans, unlocking policies, frantically racing other civilizations to the finish line of the space race, and saying "just one more turn." In 2012, developer Firaxis added even more moving parts to the already deep game, incorporating religion and espionage into the Gods & Kings expansion pack. With so many elements working together, and so many hours already invested in the game, how can Firaxis improve upon the Civilization V experience with its next expansion, Brave New World? As Lead Designer Ed Beach explained to The Escapist at PAX East, the developers looked at how all of the systems were working together and found opportunities for improvement, hopefully creating an even more in-depth experience with more fleshed-out paths to victory.

As Beach explained, the additions to Civilization V introduced in Gods & Kings focused on the first half of the game, about to the Renaissance era. "There were a lot of things that you encountered after that, later in the game... that sort of culminated towards the cultural victory or diplomatic victory, that we thought we could improve on," he said. "We wanted to give more ways for a builder-type of player, a non-militaristic player, to still create an amazing civilization and feel like they can overtake the rest of the world in terms of culture or their diplomatic prowess."

It's already possible to achieve diplomatic and cultural victories in Civ V, but Brave New World changes how they're won. As it exists now, the diplomatic victory requires the player to form the United Nations late in the game, which could backfire if its members vote for another civilization to be the world leader. "We thought that the diplomatic body that votes on things could be a lot more interesting if it had a longer footprint on the game, and was active sooner," Beach explained. "So what we do now is, when we get towards sort of the Industrial part of the game, at that point the World Congress forms."

The World Congress itself is another of Brave New World's additions, and its voting members can actually affect the rules of the game as it goes along. Initially, the job of the World Congress is to vote on things like "the cost of how much it's going to be to keep a standing army around" and "whether or not some of the resources are allowed to be created" (whaling being an example of something that might be outlawed by the Congress). "As it gets further and further along and you start going towards the diplomatic victory, you can send spies to other people's capitol cities and use them as leverage to find out what the other states are going to vote for in the World Congress, you can actually trade votes in the World Congress as well." This results in more of a lead-up to the actual end-game voting, giving you more ways to work towards a diplomatic victory as you move through the ages.

The cultural victory appears to have gone through just as many changes as the diplomatic one in Civilization V: Brave New World. Before, "it was all about building a small, compact set of cities building as much culture as possible... you just waited for all that culture to build up over time, so you could get enough social policies to win the culture victory," Beach said of the game's current path. "That was pretty cool, but it was a little too passive. We really felt like, as a military player, you have to go out and spread all over the entire world to win a victory, and we thought there's no reason that your culture couldn't be doing the same thing." In Brave New World, the player takes more of an active role not just in gaining culture, but spreading it throughout the world. Where special buildings used to give you three or four culture per turn, now they'll only give one--but you'll have the opportunity to get more culture by adding great works to your cultural buildings.

The culture-related Great People have been expanded upon to do just that, and gaining their signature creative works will go a long way towards getting other civilizations to "recognize your cultural amazingness." Great Artists will still pop up from time to time, and they'll be joined by Great Writers and Great Musicians, too. "So if you get Shakespeare as your great writer, Macbeth will be his great work. If you get Van Gogh as your great painter, Starry Night will be his great work. And you start collecting these great works, putting them into your culture buildings, deciding which cities you want to show them off in, and what happens is the cities start to generate tourism," Beach stated, bringing up another of Brave New World's additions to the core game. Getting people from other civilizations to visit your city is now a key component to a cultural victory. Unlike religion, which spreads city by city, culture spreads person to person, and civilizations you have a good relationship with are more likely to be influenced by your culture. "If they're hostile and have a different ideology, they won't want your culture influencing them at all, and those are going to be the people you have to convince that your culture is great so that you can win the cultural victory," Beach said.

One new way to increase your relationship with other empires in Brave New World is to establish trade routes with them. Starting early in the game, international trade routes add more strategy to where you settle your cities and how to build your empire. As Beach explained it, "It used to be that you automatically earned gold just by settling along places where historically trade would have occurred, like along a river or on a coast. And those places are still good, there are advantages in the trade system for settling in those types of places, but now what you have to do is, you don't just automatically get that gold. You have to set up trade routes with trading partners and send caravans and cargo ships back and forth, and that's another type of builder gameplay." As you build your empire, the trading partners you choose may also affect your civilization's religion, "especially if you're connecting to a holy city." Science will also trickle in from more technologically advanced cities, so there are great advantages beyond just gold to using trade routes (though gold is always nice, too).

At its core, Civilization V is about, uh, civilizations, so it's only fitting that nine new ones will be joining the ranks in Brave New World. Only three have been announced so far: Poland, Assyria, and Brazil. Assyria is "very focused on building up their science base through conquest of other civilizations," with the special ability to "gain a technology when they conquer a city from another empire." On the other hand, Brazil is a cultural hotspot, particularly later in the game. "Everybody wants to go to Brazil while they're having a Golden Age," which represents the Carnival celebration--in fact, that's what the civilization's unique ability is called. "During the Golden Age their tourism output is doubled... And so what happens is, if Brazil's in your game, you're going to probably have to win a victory before you get to the end of the 20th century and they start getting those Carnivals going, or else they're going to probably win a cultural victory against you."

With so many new elements big and small coming to the game in Brave New World, it was a challenge for the developers to keep it from becoming overwhelming. Beach said they "simplified a few things" after playing it internally, and maintained the balance with a "great group of external testers who are actual community members and giant fans of the game." As they add new systems to the game without interconnecting them, the developers are better able to get a feel for how everything works together, "and once we get the systems all in place, that's where it gets very interesting and exciting, and that's the point we're at right now." Though Firaxis is "comfortable with the complexity" of Brave New World, it's also always willing to streamline when necessary. This approach worked well with Gods & Kings, and hopefully will continue to be successful with the next expansion.

Though the World Congress, international trade routes, new civilizations, additional great works, and retooled victories might seem like enough content for one expansion, there's actually one more thing you can look forward to in Brave New World: XCOM units. "I carpool to work with two guys on the XCOM team all the time, so I hear about XCOM all the time, I played through the game two full times immediately within the first two weeks after it came out in the fall, so I'm certainly very familiar with XCOM," Beach replied when I asked him about how the crossover happened. "We started looking at Brave New World, at places we might have had holes in the chain of units as you progress through history." One such opportunity was the paratrooper unit; there was only one in the whole game, appearing around the World War II era, and it could never be upgraded. "And that's the way XCOM squads get around the planet, they have the Skyranger and they can go anywhere they want to, so it just all came together like that."

If all of these new elements work together the way they're supposed to, it sounds like a formula to make Civilization V even more addictive and productivity-killing. Civilization V: Brave New World will be out on PC July 9 in North America and July 12 worldwide, with a Mac port following sometime after that.