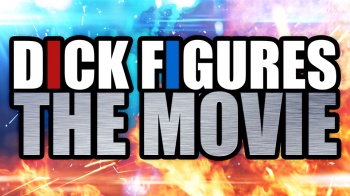 Dick Figures has been a popular web series for three years, racking up over 350 million views on Youtube. Because of their success they decided to make a film, which they brought to Kickstarter for funding.

We had a chance to ask the director, Zack Keller, a few questions about his film and his experiences and influences that went into its creation.

At what point did you decide that you would make a Dick Figures movie?

The movie came about organically, just like everything else with the show. A lot of what informs of us what to do next comes about by reading the comments on YouTube and interacting with our fans on Twitter/Tumblr. When the fans wanted the soundtracks, we released them. When the fans wanted t-shirts and posters, we made them. For months we had seen comments on YouTube asking for a Dick Figures movie, which was something we've always wanted to do too, so we took a risk and spent six weeks planning, and then another six weeks running a Kickstarter campaign. It was honestly one of the most exhausting periods ever for us but we were blown away by the outpouring of fan support and are so grateful that we were able to make this movie. It's been the most fun we've ever had.

How long did it take to bring the movie from writing to completion?

Exactly one year to the day. Our Kickstarter funded July 2012 and at the end of July 2013 we were finishing the final renders. That is lightning quick for a feature animated film, many of which take 3-5 years to create. Thankfully, the team who made the movie had also been working on the show for three years so they were all seasoned pros who were eager to flex their creative muscle. We couldn't be more proud of the talented people around us, they blew us away at every turn.

Why did you bring your film to Kickstarter?

Dick Figures has always been a show made for the fans, so when we considered doing Dick Figures The Movie we knew we wanted it to be made by the fans as well. Over the past three years the fanbase exploded to over 350 million views across YouTube and after reading all the comments we knew there were tons of people out there interested in a movie. Since Dick Fingers started online, we thought it was only right to keep it there by pushing the boundaries of online crowd-funding and distribution. We hope we've done a little bit to help encourage other independent artists and creators like us get their projects up and off the ground too!

After your success with Kickstarter do you plan to bring any further projects up through that style of fund raising?

We definitely think crowd-funding and digital distribution are the future of filmmaking, both for independent and studio movies. This format allows a direct line of communication with the fans which is immensely helpful, but also puts the movie into people's hands internationally from day one across a wide variety of platforms. We strongly believe that creating entertaining content that's accessible everywhere not only helps to crush piracy but also allows fans to easily share the movie they love right online. Especially for Dick Figures The Movie, which didn't have any money for advertising or marketing, we had to rely on our amazingly supportive fanbase to spread the word through social media. Without a single dollar spent, Dick Figures The Movie broke into the Top 10 across several categories on iTunes and that's all thanks to our incredible fans! Making this movie has been a dream come true and we're excited to do it again for the next one.