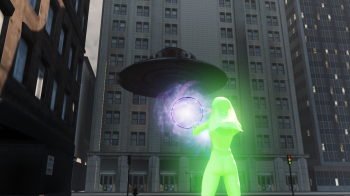 City of Heroes was contained a lot of dated mechanics that - near the end - felt archaic. What new things are you working on to update that formula?

Sara "Firefairy" Quinn, President: We have paid a great deal of attention to what was clunky in our beloved predecessor as of its closing, and listened to its creators when they spoke in interviews about what they had been hoping to do to update, or wished they had done earlier in order to avoid the clunkiness. We are learning from their experience, and using that knowledge to build a world without those issues. We are also taking our own experiences as players into account, and building in strengths from other game experiences. Cabbit is much more exciting when he explains it, but overall, we know quite well what wasn't working in CoH, and we are updating plot structures, the alignment system, and the architecture, both inside and out, to make the world feel more alive. We're also working on a rules structure that allows the powers system to be more flexible.

Chris "Warcabbit" Hare, Project Lead: The player control experience, we're going to keep fairly similar to the old style, but without a few of the same limitations. The universe they play in, though, is going to be a bit different. The days of the same, Escher-esque warehouse or office map twenty times in a row are over. The enemies are going to be different, and the ends of arcs are not always going to be about punching a big bag of hit points. We're going to have missions where you perform detective work, missions where you have choices of entrance points and choices about how you perform the tasks. We're going to crank up the interactivity in the missions as well. We've got plans for a kind of mission that'll make the old Mayhem Missions look faded. We're talking about blowing through walls here, not just blowing up fire hydrants.

What kind of reaction have you had from fans of CoH?

Sara Quinn: Considering that we have managed to both staff our project and fund our Kickstarter with the efforts of fans, I would say overwhelmingly positive. The vast majority of our volunteers were avid CoH players, and we owe our swift Kickstarter success to the enthusiasm of the rest of the community. We have gotten some criticism when we did not do a particular thing in the manner someone might wish, but it has been largely delivered in a manner indicating that they wish us to do well, not that we are being attacked, and we have listened and taken it into account in our further development.

Chris Hare: Very positive. Not uniformly so, but very positive. We're fans. I'm personally known to a large percentage of old players, simply due to my longevity in the game, my membership in the Paragon-sponsored Player Event Resource Committee, and due to running one of the early group-of-supergroup coalitions. Not to mention being a long-time friend of The Cape Internet Radio.

But I'm just one of many people on this team, and we aren't just a single group of fans, we come from a very diverse and wide selection of the fanbase, united by our love for the old game. This means that we've got a broad spectrum of ideas and concepts about what the game was, and that's pretty healthy. It also means we get a fairly wide base of people to talk to in our 'monkeysphere'.

There are those who refuse to believe we can do this. We've given the evidence we have, we stayed together without any hope of funding for a year to make sure we would stay together as a team, before we even thought of engaging the Kickstarter. We've made a lot of progress. But they won't believe until the servers open, and maybe not even then.

There are those who were hurt, badly, by the servers going down, and don't want to believe in us until we get them back up again. I can understand that feeling. I've been hurt in life, and opening myself to hope after that took a long time. But we have a goal, and we will make it happen.

What major features will be "absent" at launch? To put it in City of Heroes terms, something like Villains.

Sara Quinn: Actually, due to the way our alignment system is set up, the pigeonhole system has been replaced with a more flexible system that allows for degrees and types of heroism or villainy, rather than just four strict types, so all the alignment types will be available at launch, although I cannot promise there will be even amounts of content available for every shade- that will be determined by other factors. Other than that, we are focused on providing quality content, so what will be available at launch will be the content we can polish to true release quality, not the full wish list, which I expect we will be working on for years thereafter.

Chris Hare: Vehicles, sadly. We want it, we're going to design for it, but I don't think we'll have the spare time to put the gameplay in. Our pet-controlling class is designed to be even more customized and flexible than the previous generation, so we might have to delay that a bit as well. The question is, how much of each feature will we be able to fit in? We've got a number of plans for launch, based on how much we can get from investment and how soon we get it, but the initial level cap may be lower than we like. If we have to launch at a lower level cap, it's not going to be something we're pleased about, but those 30 levels will be full of content and features. And the remaining levels will be along as fast as we can make them. And remember, a lot of content can be designed in parallel, so we can hire people to perform tasks, and then assemble them all at once.