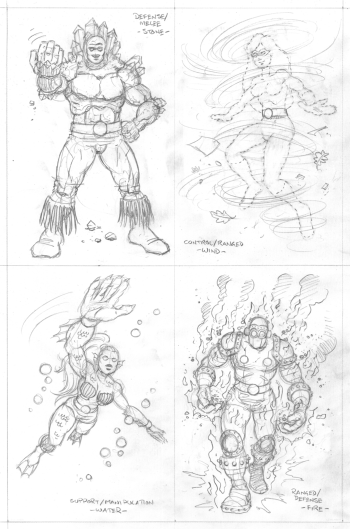 This is, to our knowledge, one of the first times the fans of a game have tried to "revive" it. How do you feel about being the pioneers of that?

Sara "Firefairy" Quinn, President: I don't know that we are the first to try, but I don't know of any other attempts that actually had much of a chance of success. Mostly I have heard about projects that died in infancy because there just weren't enough people, and studios that have taken the idea and made it into an entire new game. I do think we are the first to do it entirely as a non-paid effort, and honestly, I think we will need to find enough funding to have at least a few people working on this full-time if it is to succeed long-term, but I love the way we started.

As far as being pioneers, I feel we have a massive responsibility not to screw this up. As with any first, we are setting precedent for how well this works. If we don't do this properly, it will make things massively harder for the next group to try something of this nature. Obviously, we are trying to succeed for any number of reasons, but I do think of our effect on posterity as one important factor.

Chris "Warcabbit" Hare, Project Lead: I really think this might be the biggest community led and organized long-term effort that has not had university support. Most open source projects tend to have one or two core players working on it full time thanks to that sort of funding. We're just stubborn. We're lucky that what we're doing can be a faithful, if completely reinterpreted, evolution of the game. But I don't know if we're really the first, it's just that we're one of the first to go digital to digital. The people who made the old SSI Gold Box games were fans of D&D, and I know Bioware's people were fans of the old AOL Neverwinter Nights. And, of course, to follow Bioware, I know the people behind SW:TOR were huge fans of KOTOR. Still, if our example inspires others, that's pretty awesome. Making games isn't easy, but all you need is time, effort, and a lot of persistence.

Nate "Doctor Tyche" Downes, Technical Director: There have been spiritual successors of previous games, even fan made ones. There even have been ones to MMORPG's which have been shut down (Lego Universe springs to mind). The main difference I can find here is that the tools available to such an effort have improved dramatically over the past few years. Five years ago, the options for game engines was quite limited. The professional tools were incredibly expensive. And the ability of a team over the world to work together was very limited. The same advancement which allows businesses to maintain virtual offices across the globe also enables us these same opportunities.

Are there any plans to bring your developers together under one roof, and if not, how do you plan on overcoming the challenges of being a distributed studio?

Sara Quinn: I am best as a telecommuter, honestly, but there are benefits to having a physical location, even if a good deal of the workforce telecommutes. We plan to eventually have at least a location at which we can conveniently receive mail as a company and house our servers and the like, but I am not certain there would be a great deal of benefit to trying to pull people from all corners of the world to one location when they work quite functionally from their current locations.

Chris Hare: There are plans, certainly, but they won't come into effect for a long time. It's an expenditure that we just can't afford right now, and even if we do, we intend to have a fully armed and operational telecommuting experience. Our volunteers come from Sweden, from Canada, from Scotland and beyond, not to mention most states of America. Not everyone wants to move. Heck, I don't want to leave New York myself.

But this is part of why we spent a year together before we kickstarted. We've got a functional organization scheme, and it's working. It's survived senior staff leaving, lead developers having multiple disasters in the family, and hardware meltdowns. The fact that we've been able to put out an update every day of the Kickstarter has been a real test of it, but it's holding together. And now that we've got approval and a following, I don't see people leaving us.

Ian "Doctor Boston" Hawkins, Business Office Vizier: Some in the business office like the lack of liability and rent that comes with being a 100% remote company :)

If you're interested in more information about City of Titans then you can check out the kickstarter here. Be sure to look soon - the campaign closes on November 4th. Missing worlds media also maintains a forum for the game, as well as twitter and facebook.