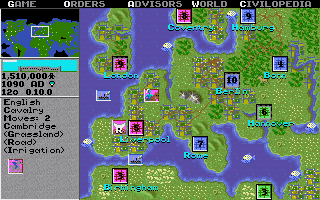 It's not often you get to speak to the man who is responsible for absorbing years of your life with a game. Sid Meier designed and programmed the first Civilization back in 1991, and the legacy that game spawned has been like siren for me, always calling me back to dash upon the rocks of its turn-based goodness. The veteran game designer has been honored in nearly every way the industry recognizes, commercial and critical success, multiple GOTY awards and the second induction into the AIAS Hall of Fame after Shigeru Miyamoto. At Firaxis, the studio behind Civ V and the new XCOM, Meier takes on more of an advisor role now even for the game's that bear his name - answering questions the younger projects leads might have as a game designer emeritus.

Even though Sid Meier could pick any project he wanted, he prefers working on smaller teams now. He chooses to exercise his design muscles on more compact games that he designs and codes himself with only input from engine designers, network engineers and graphic designers. The latest of these is Ace Patrol, a simple yet addictive World War II dogfighting game, that just had its update Pacific Skies come out on Steam last week and pushed to iOS a few days later. I got to talk to Meier a little bit about why he's chosen a more hands-off approach for the bigger, flashier games, how board games are an influence on computer games and what attracts him about doing a project like Ace Patrol. Oh, and what trash-talking from Sid Meier might sound like.

"Each project is different, has its own story, its own arc," Meier said. "With Civ we've kind of had a history of bringing in and giving a new designer a chance to build on the Civ franchise. With Civ we feel we know how that works and I drop by and see how things are going but it's not something that I'm programming and involved with day to day. XCOM really was Jake Solomon's dream to do that game, and again he and I talked about things but he led that design."

"As a designer you're looking for new challenges, you're looking for kind of ways to experiment and do things that you haven't done before and that was certainly the appeal of doing Civ World, the appeal of doing Ace Patrol for iOS and Steam," Meier said. "We're kind of experimenting with this area [of touch-controlled games]. It's fun to do games on a shorter time schedule with a smaller team. We get to do the same amount of gameplay essentially that we would put into a AAA game but we get to do it quicker and we might not be able to afford the full motion video or a symphony orchestra score but we get to focus more time on the gameplay and those things. That's the part that's the most interesting to me so that's why these smaller projects are fun right now."

The mobile market exploded a few years ago, and there's still significant growth in iOS and Android games, but it's rare to see a designer who's made his bones in the hardcore PC market make the switch. What goes into designing a game for a mobile market and not just PC? "You're dealing with an audience that perhaps has a couple minutes to play or is basically in a situation often where you can be interrupted or you're kind of on the go or whatever so a turn based game is one that will play at your pace," Meier said.