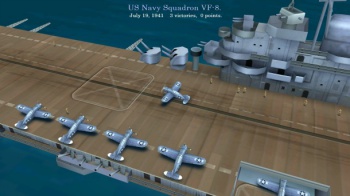 While the subject matter and gameplay elements took cues from classic pen and paper war games like Knights of the Air and Blue Max, the easy design of board games like Settlers of Catan was a huge inspiration for Ace Patrol. "We really found that kind of the board game look, or this kind of hands-on sand box felt very accessible. It was clear what was going on, things were colorful and large and fun to play with and move around and just felt like, especially as you were touching and moving fingers around the screen, like it kind of all came together. The board game feel was something that made the game more accessible and easier to jump into and play."

In fact, the boom in the popularity of board games is something Meier has been watching with interest and he thinks tabletop games have evolved in concert with the rise of video games. "There's a lot of synergy," he said. "It's interesting. I go back to when I played hex-based wargames and it took three or four hours to set up your game. By the time you set it up, you were too tired to actually play. Then I saw computer games come along and they were games you could instantly play and all of a sudden those old wargames didn't make sense anymore.

"Then boardgaming moved to multiplayer and social, the one thing they could provide that you couldn't get on the computer was the social experience, sitting around the table and playing," he continued. "So they kind of switched over to this fast play style, a turn system where everybody can participate. I think board games have been moving to fill in the gaps where computer games are not. Then computers games became more multiplayer and then board games became in some ways more mass market or more accessible to kind of grab that audience that wasn't playing as much computer games but there's always been a, now computer games are picking up on some of these cool ideas of accessibility and shorter play times that some of the German-style board games are using. There's a lot of back and forth but I think it's always been the case that computers do some things better and board games do other things better and it's been, that's what's kept them each their own unique and viable style of gaming."

Meier thinks all game designers should be paying attention not only to other videogames but board games as well. "I think there's a lot to be learned from board games," he said. "Although when you're talking about a first person shooter, the biggest problems of a shooter are probably not addressed by most board game mechanics but still in terms of an overall story and overall ubergame to the shooting part. I think board games are good in creating a large scale structure of things, something that persists for hours and can keep you engaged and interested.

"As you get away from the shooters and more into the strategy games there's more and more to be learned from board games. It's certainly where we are, there's a fair amount of overlap but we have do things like artificial intelligence and have all the power fog of war and we have a lot of tools that board games don't have, which makes our games different. On the other hand board games have four, five players or whatever the number is to inject their own personalities into the play of the game which we don't have for computer games. We each have our own tools and strengths that we can work with to make the game as fun as it can be so there's some overlap but there's also some uniquenesses I think to each of the types of gaming."