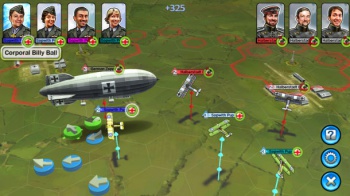 Meier has attempted to inject the tension of multiplayer into Ace Patrol. "What strikes me most about our testing has been how emotionally asynchronous multiplayer can get. People here [at Firaxis] are playing and they're just from one office to the next so there are lots of opportunities to interact with the other person. It does bring a whole new dimension of emotion and intensity to the game when you're playing against somebody that you know. I know when I play just single player I'm in a cerebral thinking mode but when I played a game against Jake [Solomon, project lead on XCOM] the other day, all of a sudden became a lot more important that I win the game.

"There's a lot of trash talking," he said.

Wait a second. I've spoken to a lot of people at Firaxis over the years and every single one of them has told stories about how Sid Meier is the nicest guy in the world. He finds it hard to even give negative notes on their games. How the heck is he talking trash in Ace Patrol?

"It was tasteful trash talking," Meier admitted. "It might not have been trashy trash talking. It was kind of letting Jake know that since I was the designer that he should let me win and then he acquiesced, it was all good."

Unfortunately, the asynchronous multiplayer doesn't work with the Steam version of Ace Patrol: Pacific Skies - there is still a hotseat mode available - but you'll still have a significant challenge in fighting against the A.I. in Meier's new code. "We redid a completely new AI for the game and I think it makes the game play quite a bit differently in Pacific Skies than Ace Patrol. The new AI kind of evaluates all the possible new maneuvers of all the planes on the enemies side and they kind of work in a more interesting coordinated way than perhaps the individual aces of Ace Patrol one," he said, obviously proud of the work he personally did on the game. "It's not a big thing but it's something I had a lot of fun working on. It doesn't necessarily hit you over the head when you start to play it but there's a new AI and I think it's pretty interesting to play against."

A new artificial intelligence is just one facet of game design, true, but it's a very important one for strategy gamers. The fact that Sid Meier was able to tweak and perfect his own A.I. for Ace Patrol - no one did it for him - is a very cool achievement. If this game was any bigger, Meier would have had to change his role into more a project manager without staying hands-on. The fact that he still gets his hands dirty mixing up code to improve his games makes them even more personal expressions. Playing against the A.I. in Ace Patrol, you can imagine you were playing against Sid yourself and even tastefully trash-talking with him. And that's got to be gratifying for a game design legend to have as his legacy.

Of course, there is one downfall to programming your own game on a small team as Meier admitted to me: "I wish I could hire somebody to fix my bugs."