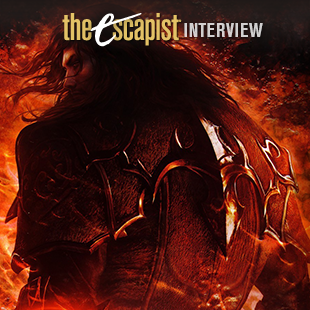 ESC: The present-day environments you've shown from the game are clearly modern, but have a distinctly gothic influence that intentionally keeps the game feeling "Castlevania-like." Can you talk about how you merged those two styles?

DC: One of our big worries was that having a modern city setting would make it seem less like Castlevania. When we designed the city, we thought; "so basically what's happened is that the castle fell into ruin, but it still exists, so the city is built around the castle. You find that a lot in european culture. Like Madrid, for example: Castella, the region [of Spain where Madrid is [located], is literally "the land of castles," and you tend to find modern technology - modern buildings and modern architecture - are built around castles. We tried to make the castle and the city kind of integral to each other, and you find in the game, as well. You could be in one part of the castle, then you walk out and you're in the modern city. You get the feeling that it was all built together.

At the same time, keeping it imagined city was really key, I think. Putting Dracula in Times Square: It wouldn't have worked, You know. It would've felt weird. It wouldn't have felt right, so we wanted that felt like it belonged: Stained glass windows, gargoyles, the kind of things you'd expect to see in a Castlevania game.

I think not being afraid is really important when you're working on a series like this. Being held back by the past and trying to make a game that tries to fit the conformity of what people expect from Castlevania would be a mistake. Making brave decisions, taking risks, that's what makes people excited. When they play the game, they'll go: "Wow, this is amazing. I wasn't expecting this." Exceeding people's expectations all the time. I might be wrong, but I think that's how you get players interested in what you're doing.

ESC: I would agreed with that, definitely. Speaking of feedback; what do you think was the single most important lesson you took away from making the original [Lords of Shadow]?

DC: Pacing. It was something in the first game that, in hindsight, I felt we could have trimmed the game slightly and had a better pace so that throughout the adventure you were getting something every step of the way. I think with [LoS] 2, we have a much better pace. Although the game is 20 hours, it's 20 hours where you're always getting something every five minutes, and you're building up to a climax that needs to deliver. When we planned out everything, the pacing was there. There are moments in the game where it's guieter, but there's always something around the corner: a new ability, a new cutscene, a new story element, a new puzzle, a new area to explore. There's always something the player can do. And even when the player goes back, there are new things for them to find. So when you get the mist ability, for example, you go back to an area and realize: "Oh, those bars were there and couldn't get through it but now I can." And now there's a whole new area to explore with new enemies. That's something we learned from the previous game: To get the pacing tighter.

ESC: Similarly, can you talk about how bringing the principles and mechanics of the original Lords of Shadow to a portable platform in Castlevania: Lords of Shadow - Mirror of Fate have, in turn, affected your design sensibilities for Lords of Shadow 2?

DC: With Mirror of Fate, what we tried to do was to create a game that felt like a throw to the classic Castlevania games. Trying to keep the Lords of Shadow vibe going, but giving it more of a classic feel so it felt like a sequel to [Castlevania III] Dracula's Curse. That what we had in mind for the handheld. Making a handheld game was very different than making a game on this sort of scale. I think that one of the things Mirror of Fate is very good at is capturing the feel of Castlevania one, Super Castlevania IV, Dracula's Curse, those kind of games. What I think it's not very good at is trying to capture the "Metroid-vania" element of it. It wasn't something we wanted to do. We kind of felt the pressure to do that kind of backtracking, but I don't think it worked in terms of the combat and the Lords of Shadow side of things. If we were going to go back and do it again, we'd probably do a game more like Lords of Shadow, a third-person action game.

But it was fun and it's got some really cool story elements to it, I think, that really tie into what we're doing with Lords of Shadow 2. I think it very nicely covers the Belmont feud with Dracula and why it happened, which is very important, and makes a lot of the characters in Lords of Shadow 2 really stand out. Like Alucard, for example, why is Alucard against his father. I think it's explained really well in Mirror of Fate. I think if you've played Mirror of Fate you'll certainly have a deeper appreciation of the story in Lords of Shadow 2 than if you haven't.


ESC: Moving on to a question I'm sure you've been getting a lot lately: The game is coming out for PS3, Xbox 360 and PC on February 25. At that point, the Xbox One and PS4 will have been in stores for about four months. Does that change your perspective at all? Releasing a "Gen 3" game in a "Gen 4" world?


DC: Not really. I think that there are still a lot of people out there that have what I call the "current gen" consoles - PS3 and Xbox 360 - and there will be a lot of people at Christmas who will get one of those consoles because you're not going to find a PS4 or an Xbox One right now. From a commercial perspective, there is still a market out there. Of course all the talk is about next-gen, what it's going to do, but I think Lords of Shadow 2 certainly stands up against next-gen titles in terms of visuals and in terms of content. If anyone's looking for a game that's going to give them a lot of depth on their current-gen console, I think this hopefully will deliver.

ESC: You've stressed that the game is pretty "full": Is there anything that, if you had more time, you would have included or refined?

DC: No, I'm very happy with where we are with the game. As a developer you always want more time, because it means more polish. There are certain things in the game - the lighting here, characters clipping through the environment, that kind of stuff - that I would have liked to spend more time to polish up, but you've got to let go. Letting go of something is very difficult to do: All of the team is kind of reluctant to let this baby go, but eventually you've got to. I suppose it's like a father and a child where eventually the child grows up and you've got to let them go. I think this game is ready for the world. I think we're proud of what we've done. I think as game developers, as creators, you have to be proud of whatever you put into the market and you hope that people enjoy it.

DC: My next step is to, hopefully, work with MercurySteam on a new project with Konami. What happens next for Castlevania, I don't know. That's for others to decide. We feel like it was a torch that got passed to us and now its our turn to pass it on to somebody else. I think that whatever happens next, whoever comes next, they need to be free to do whatever they want to do with the series. They need to be able to make their own mark on the series. I wish them all the best, but I'm done. We've got other cool stuff to do.

ESC: So are you already working on that new project, I know you can't tell us what it is, but can you say you are?

DC: Yes. I'm going to have a little holiday first but, yeah, we've started on the next project.

Right before this interview we got the chance to see and play through a couple of sections of Lords of Shadow 2. Check out our preview to see if we think the game makes good on Dave's promise.