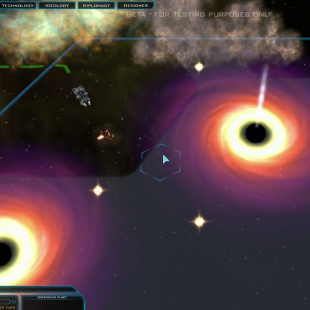 I'm a big fan of strategy games of all kinds; From my earliest memories playing old Avalon Hill games like Blitzkrieg with my father to burning away countless weekend hours playing the likes of Civilization, Master of Orion and StarCraft. The more robust the better in my opinion, and with Stardock's epic Galactic Civilizations II, I dedicated quite a few hours to conquering the universe with economic might, technological prowess, and customized fleets of warships.

So you can imagine that I'm expecting great things from Galatic Civilizations III, the long awaited sequel that so far promises to have more of everything I loved from the first game. Previously, the game's alpha build was only available to select dedicated few who pre-ordered the game, but today Stardock is taking advantage of Steam's Early Access program to launch the beta of GalCiv III, making the new version of the game available to everyone who pre-orders the game. In preparation for its release, I spoke with Paul Boyer, GalCiv III's lead designer, about the upcoming beta and what players should expect in this early version of the game - and in the updates to come.

"The first thing that's different is that the game is actually fun now," joked Boyer of the game's transition from alpha to the beta. The alpha was a bare-bones framework of Stardock's goals for GalCiv III, but Boyer said that "most of the game dynamics are in now," some of which were designed with the help of fans who put down money for the Founder's Elite Edition of the game. "One of the advantages of doing the Founders' program the way we did was that we got this hardcore, core fanbase that really cares and they're constantly giving us feedback." he said, adding how some features - like orbital shipyards that can be supplied by multiple planets - were included out of discussions with fans. "A lot of it is really good."

The first thing players can look forward to with the beta of GalCiv III (and the full game) is having much bigger galaxies to explore and conquer. "The largest galaxy is twice the size of the largest galaxy from GalCiv II," and for players with 64-bit operating systems, the potential to have humongous maps filled with dozens of aliens races will certainly keep them busy for months - although such massive maps may not be available for GalCiv III's new multiplayer mode. With the addition of nebulae, dust clouds, planetary resources and other cosmic terrain, galaxies will also feel less empty than those of GalCiv II. "If anything," Boyer said, "I may have [added] too many black holes in the beta."

Another feature from the alpha, the highly anticipated ideology system that represents GalCiv III's new take on morality, is getting significantly fleshed out as well. During the alpha, players would accumulate points in benevolence, pragmatism or malevolence based on their responses to random events, and then could spend those points to earn empire-wide passive bonuses in one of three corresponding trees. "Before, it felt a little bit too much like another tech tree, whereas now it's essentially rewards," Boyer explained of the changes. "You get enough ideology points in something, and bam! You get a big bonus." Depending on where players sink their points, they can now get access to instant benefits, such as free colony ships or doubling their empire's influence.