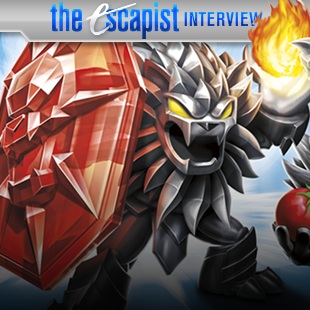 I like to play Skylanders with my daughter. When she was 1 or 2 years old, she had fun putting the figures on the portal accessory and hearing the funny lines from TV. Occasionally, she would just sit, watch me play and yell for me to take out the bad guys. Now that she's 3, she is starting to play with the controller and move the Skylander heroes around the screen herself. It's like witnessing the birth of a gamer, one funny interaction at a time. But while Skylanders is certainly designed and marketed with kids in mind, I've always been impressed with how much I enjoy it as an adult. To me, the Skylanders reminds me of The Muppets or old Warner Bros. cartoons in that there's plenty to enjoy for all ages to love about them. But whenever I mention the series to my peers, yes even the staff of here at The Escapist, they scoff like a music hipster scoffs at 128 kbps MP3s. I spoke with the co-founder of Toys for Bob Paul Reiche III this week and asked him this point-blank - Why do gamers dismiss Skylanders so easily? More importantly, how can I convince them there's something worthwhile in the cleverly designed toys, interface and software?

"There are some people who are kind of in the intersection of two sets," Reiche said, describing a sort of Venn diagram. "There's the set of people who know Skylanders and love it, whatever their avenue into it, whether it was their own kind of love of toys or characters or their kids, they're there. Then there's the group of people who just either don't know about it, or at least are kind of put off by bright colors, and kind of craziness."

Reiche thinks that those people are similar to those who have strict concepts of what kinds of content they will enjoy. "It's sort of like dragging someone to The Fifth Element," he said, referring to the 1997 film starring Bruce Willis and Chris Tucker. "I had a lot of more serious science fiction fan friends who were really put off by how crazy and colorful and almost out of control the creative sense of that movie was. But I loved it! There was this sort of creative chaos to me and a willingness to not take itself, or even the viewer take themselves too seriously, so if you have kind of a fun, funny take on the genre."

So that's kind of what Skylanders is like - a creative, colorful and irreverent take on action adventure games. The colors and the toy gimmick doesn't mean the core of the series is any less rooted in hardcore genre tropes than the over-the-top Fifth Element had a strong sci-fi skeleton. For Skylanders, that skeleton is Reiche's history designing monsters for the tabletop roleplaying game Dungeons & Dragons back in 1980.

"I, just like many people, discovered fantasy role-playing games in high school and I happened to be tremendously fortunate that the group of people I was with ended up moving into the professional world of making role-playing games," Reiche said. "My buddy was a guy named Erol Otus, who was one of the original artists who, if you remember Deities and Demigods from way back." He moved to work for TSR, the company that published D&D back then, and his favorite task was designing the monsters that ended up on the pages of books like the Monstrous Manual and the quirky sci-fi sub-setting called Gamma World. He's credited on several landmark adventures such as the Isle of Dread and the Scourge of the Slave Lords series, as well as inventing the Thri-Keen race.


"I had started meeting people in the nascent computer game industry at D&D conventions, and so when I left TSR about a year later, I came back and hooked up with them, and these are the people who had founded Epix," he said. He ended up working for some of my favorite game developers in the 1980s - I played games like Archon for too much on my Commodore 64. "We ended up working on some of Electronics Arts titles, Archon and Murder on the Zinderneuf, later, Mail-Order Monsters, with a couple of other people."
Related to:
greg titoactivisioninterviewskylanders trap teamtoys for bobvideo games
0
Tweet