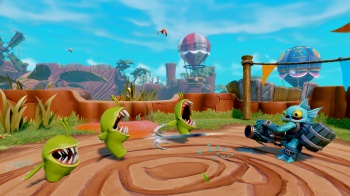 The need to innovate is high right now for Activision and Toys for Bob - Disney Infinity 2.0 aims to grabs some of the "toys to life" sub-genre market, and Nintendo has its own plans with "amiibo". "We know there are people breathing down our necks now, and we really need to knock it out of the park. Do something unexpected and fun and something that everybody really wants to do, they just haven't really said it out loud yet," he said. The fact that they can move from heroes to villains quickly is an advantage, but it's not the only one Toys for Bob has against the powerhouses of Nintendo and Disney.

"Obviously, we have to stand up against some titans now, and, so we'll focus then on our tactical advantage, which is that we're not limited to anything," Reiche said, citing the decades of cultural baggage carried by characters like Mickey Mouse and Mario. "We can make the craziest characters in the world, as long as they're fun and have interesting personalities and again give you some other avenue into this monster 'slash' hero kind of motif that keeps showing up."

Software-wise, Activision and Toys for Bob will also score a major win by being the first AAA game to launch on 10 platforms simultaneously, including the mobile devices such as the iPad, the Kindle Fire, and the Nintendo 3DS as well as current and last generation consoles. Inclusivity is key to adoption, and allowing people to use the toys they buy across all of those devices is going to be a huge advantage. While I've heard people complain about the price of the toys and the need to collect so many, you never feel penalized for adding to your Skylanders collection. All the toys are backwards compatible, keeping abilities you've purchased, and newer titles even add features such as jumping to older toys in game.

I'll admit that none of this is going to convince people to play Skylanders: Trap Team when it comes out on October 5th if you aren't already invested. How do I get adults to realize they are missing out? "You just gotta trick em, you know," Reiche suggested with a laugh. "Invite them over for drinks or something and roll it out.

"This year, some of our characters havee got much more weapon-y weapons, they've got more 'edge' and then we did bring in the minis, which sort of opened up the other end of this ultra cute," he continued. "I'm not sure which is going to appeal the most to adults, because I find a lot of people like those minis. I think there's some characters [which you'll like] particularly if you have a sense of humor. I mean, maybe that's it - If you can approach your fantasy role playing or whatever that thing we go to in our heads is - not take yourself too seriously and have a sense of humor - that's the way you're going to get into Skylanders because it has all those things."

It is all those things and more. Not to get too sentimental, but I think the reason why Skylanders resonates so well is because it gets at the core of what makes play so important to us as humans. When you are pretending or playing a role, no matter what age you are, a light shines in your eyes. Our ability to act as if we were someone else is a profoundly human quality, and that element of play is encouraged by blocks, dolls and, yes, even video games.

"We founded the franchise that effectively made the world a little more magical and fulfilled a fantasy that everybody already had," Reiche said. "Everybody already knew that toys came to life, they just actually hadn't seen it yet because they had only experienced it in their imaginations."