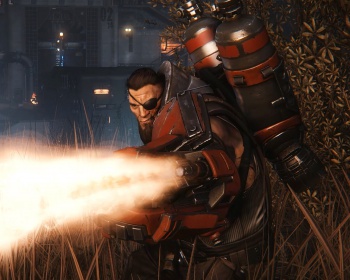 Evolve has gone light years beyond the four guys with guns model. It now claims four different Hunter classes: assault, support, medic, and tracker and 15 different characters, each with its own grab bag of weapons and tools. That's a lot of variety, but even so, the three monsters proved more difficult to design. That's especially true after the design team opted to change the players' perspective from first to third-person while inhabiting the beasts. Why keep the Hunters first-person and switch the monsters to a third-person perspective? Size matters. It was easy for a squad of smaller hunters to surround the hulking monster and take it down because of a lack of awareness on the player's part.

"When you're in first person, you have this tunnel vision of only seeing what's ahead of you. So if you got harpooned in the back, for example, you couldn't see that because you're looking this way because of a limited perspective," said Ashton. "But the problem is, we'd never built a third-person game at all and never had to deal with third-person cameras or animation systems or anything like that. There were some nice side effects to that. One is that you spend all of this time on this crazy cool monster, but if you're in first-person, the only thing you get to see are the little bits of hands in front of you. Being able to be third person and see the monster from the outside was something people were excited about."

A new design challenge rose up with the basic design of the Hunt mode, in which the humans chase down the monster by following Daisy -- Evolve's alien equivalent of a bloodhound -- who can sniff out the beast's scent. The typical game of Hunt played out like an extended chase, with a short battle at the end that determined who won and who lost. The developers played with different ways to facilitate multiple battles per match, until finally finding a worthy solution with the Mobile Arena. It's a tool that comes standard with the Trapper class that allows you to contain the monster in a small area for one minute. If no one wins that battle, the mobile arena goes down and the monster takes off. The chase then begins anew.

With all of the focus on the core experience, there's some concern that Evolve doesn't allow much room for extra content. Like Titanfall, a shooter that also put nearly all of it's focus on a few sparse multiplayer modes, some gamers may have a feeling that Evolve is an appetizer of a game instead of a main course.

Turtle Rock Studios is aware of that perception, which is why it has tried to emphasize Evacuation Mode -- a solo and multiplayer campaign of five interconnected matches.

"It's very much a concern," said Ashton. "We felt like the way for us to tackle that was to go into the procedural side of things so that we could create this new experience every time."

Evacuation is like Battlefield's sprawling Rush multiplayer mode combined with Left for Dead's campaigns, where each previous match affects the next. If a monster wins Day 1, he might have the assistance of electric eels that shock Hunters in Day 2. If the Hunters win, they could benefit from extra turrets that automatically shoot the monster. Turtle Rock claims there are over 800,000 variations of Evacuation matches.

Lack of breadth of content or not, Ashton is confident that Evolve's ready to leave a legacy on multiplayer gaming.