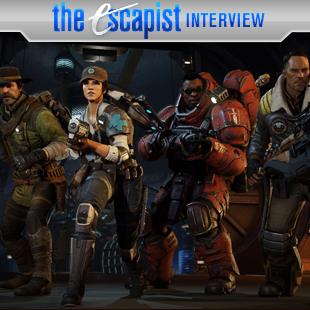 With their pale skin and long, bushy beards, Turtle Rock Studios' co-founders Chris Ashton and Phil Robb appear as if they just escaped the confines of some underground lair after decades in hiding. That's an exaggeration, of course, but the truth isn't far off.

For nearly half a decade, the creators of Left 4 Dead have been hard at work at the long awaited follow-up to their co-op zombie shooter, and it hasn't been the smoothest of projects. After leaving L4D publisher Valve in 2010, they pitched the idea behind Evolve to THQ shortly before the game publisher went belly up in 2012. They finally found a home after the game's publishing rights got bought by 2K Games parent company Take-Two Software.

Add that bureaucratic difficulty to the tricky challenge of balancing a game that pits four players against one. It's little wonder that the publisher announced in August that Evolve would be delayed four more months from Oct. 21 to Feb. 10. A 2K spokesman said the time extension would "allow enough time to fully realize the vision for Evolve and meet our collective standards of creative excellence."

According to Ashton, all that time spent under the knife has paid off.

"If nothing else, Turtle Rock will be known for making some innovative and interesting games that are different than other studios," he said. "We don't know how it's going to sell or how it's going to perform, but I think we're already proud of that we built this thing because it's so different from everyone else from all the other games out there. We're proud of that and I think we've already accomplished what we set out to do."

That uniqueness stems directly from the concept, which might qualify as gaming's first true "asymmetrical" shooter. Instead of only controlling a space marine on a quest to eliminate bloodthirsty aliens, Evolve asks players to suit up for both sides of the battle. Four people play as humanoid Hunters who are sent to a planet to eliminate a threat to a colony, while another player jumps into the skin of a massive beast bent on destruction. It's an evolution, if you will, of what Turtle Rock Studios started with the survivors-versus-zombies modes in Left 4 Dead.

"But even in that mode, the teams were even," Ashton said. "(Evolve) goes a step further with a different number of players on each side. So for us, that makes the game more interesting, it's more interesting to play the game and see what the outcome is when those two teams clash."

Part of the trick of making Evolve has been to start things simple and grow increasingly more complex over time -- tweaking and modifying along the way. Early in the design process, Turtle Rock started with one monster who had a single melee attack and four hunters that each sported basic assault rifles.

"We balanced the game for that and got to a 50-50 win ratio between the two teams, and then we added the dart rifle and tranquilizer and the monster got a concussion blaster that would knock the hunters back. And then we had to re-balance again. So it's been, for almost four years, we've been balancing the game with every update," Ashton said.