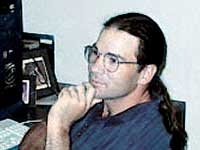 Kevin Cloud started at id Software in 1992 as an artist. Now he's a co-owner, having worked on almost every game id's ever made.

Here are the bits of our conversation that didn't fit into the feature interview.

On independent games: "When I look at the types of games that are popping up all over the place - from cell phone games to online games over the internet - there's tons of possibilities; small companies coming up with a cool idea and getting it to the market really fast. I think from that perspective you can probably be more successful [now] than ever before. Even our most successful titles in shareware weren't real, successful compared to retail titles.

"It's definitely a different type pf thing than making these 3 and 4 year titles. So I think a team of guys can get out there and make one of these browser games or one of these smaller games for a handheld and really get themselves started, just like id did. I don't see any reason why you can't do that today any different than we did it back in the 90s."

On Enemy Territory: Quake Wars: Enemy Territory ... really evolved from Return to Castle Wolfenstein multiplayer, which was very successful and got some nice awards and people played it for a long time. That gameplay was focused on teamwork. The goal was to create character classes based around the way people like to play.

[For example], in Wolfenstein, you have a tank, but the tank is basically on a path. We were dying that whole game development to make the tank not on a path so that we could drive it around. When we looked at what the character classes could do, we had the field ops that could drop air strikes. We thought ... it would be cool if we could drop in real artillery ... adding in some more strategy elements into the game. So that's where the elements came from, and it was a smooth continuation for one game to the next.

On id's audience: Our focus still remains on action games. With Orcs and Elves or some of our cell phone games, I think our audience may shift. ... I think with Wolfenstein we might get a slightly different audience than with quake Wars, but as far as our main focus, we're focused on action games, and the people that are attracted to those types of games are what we're going to get.

When I look at our next technology and what the potential for that is ... we wanted to make something with great tools in it to make it easier to get great ideas in the game. We wanted something that was a multi-platform solution ... right out of the box. The unique texturing solution that John's come up with is a nice scalable solution, so the artists don't have to worry about whether or not they're working on a PS3 or 360 or PC - it all just works.

We're looking at ourselves today, where id, say 6 years ago or more, was primarily a PC developer, I'd say today we are straight down the path of being a multi-platform developer. We're going to develop one game that works great for all players on all platforms. I think that's gonna expand our audience or make it a little bit different, but I think in terms of the types of games we're going to deliver, we're focused on delivering great, in your face, fun, visceral action shooters. That's what we do.

Next page: Epic's legal troubles, the state of the industry and John Carmack