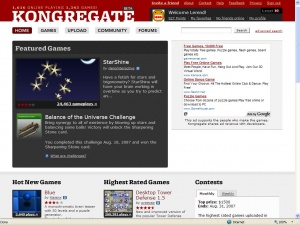 Kongregate, the social gaming site some have called the "Youtube of videogames," featuring around 1,500 user-submitted Flash games, announced today they've received another $5 million in venture capital funding and plan to use some of that cash to jump start indie development.

Kongregate's Premium Development effort aims to "push Flash games beyond where they were before," says Greer. Whereas Flash games have typically hit a wall with character development, persistent worlds and expanded development cycles, Greer hopes Kongregates community appeal, and a generous amount of start-up cash, will entice indie developers to reach farther.

Kongregate's Premium games will be offered for free and will most likely involve some form of microtransaction backend, but the developers will still get a cut of that pie and will retain all rights to the games they develop.

"We're not tying them up with a long term contract of any kind," he says, suggesting the goal is to create "something developers can make a living on." 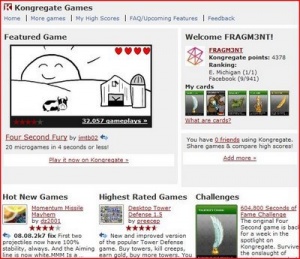 "Kongregate is all about the community," he says. "People who play and people who develop. Right now, Kongregate is a place to go on vacation, not a place where you earn your bread and butter. We still haven't broken that sense that indie development is something you do as a hobby." The Premium Development program, offering $20-100,000 in seed money to as many as a half dozen indie developers by year's end, aims to correct that.

The news of Kongregates Premium Development program follows the announcement the young company has just received another $5 million in venture capital funding, this time from Greylock Partners, the VC firm behind Digg, DoubleClick, Facebook and LinkedIn.

"We had a lot of people interested in investing in Kongregate," says Greer. "My No. 1 concern is not changing the company. I wanted a firm that I knew was going to respect what we are about.

"The $5 million is a warchest to ensure that we have the resources to stay independent and maintain our vision ... and achieve profitability (2-3 million monthly users) with all deliberate speed."