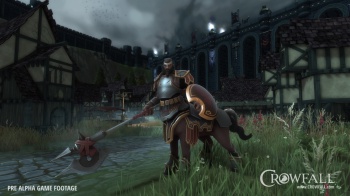 "We'd also like to try out kinda crazy rule changes that aren't really that gritty - they're more thematic," Coleman suggested. "For example: This is an elf vs dwarf server. So the only characters who can come in are elves and dwarves, let's see how that plays out. Or this is a centar-only server - only centars! Horse-man server! Horse-women too, I guess, since we hit that stretch goal. So it's a horse-person server."

Experimentation of this scope is something you'd never expect from an MMO - which Walton and Coleman believes is a rut the genre became stuck in. Walton and Coleman both believe MMOs used to have their own identities and approaches, until the overwhelming success of World of Warcraft made the entire industry homogeneous. "There's a game that's taken up all the oxygen in the environment," Walton said. "It is the one true way. Like a religion ... They found the pattern that managed to get more people involved than any other game, and in fact everyone else is aping it at some level, saying 'I can't really color outside these lines and be successful'."

"Before WoW came along there was no right way to do it," Coleman added. "It was like, 'Well there's a number of different ways you can go' ... Okay let's go here to this part of the jungle and clear this out, we'll look for good stuff over here. And we were all kind of wandering, looking for interesting things, and somebody found the City of Gold. So ever since then, it's been like 'Well, we've gotta find a City of Gold'."

The end result, according to Walton and Coleman, is an environment where every MMO either mimics World of Warcraft or tries to beat it at its own game - like the countless so-called WoW-killers we've seen over the years. With Crowfall, Walton and Coleman want to avoid that pitfall by offering a different experience - one that drops linear quests for emergent game play. "Linear content can be 70 or 80% of your cost if you're building a game like The Old Republic," Coleman said. "Compare that to: How many monsters are there total in Minecraft? But there's still infinite game play there."

That's not to say making Crowfall will be easy. "It's a miracle every time you ship an MMO," Coleman laughed. 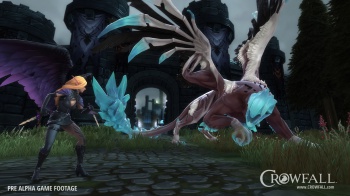 "There's a legion of things that are challenging, the real difference for us is we faced most of those before," Walton explained. Right now, the biggest challenge ArtCraft faces is tweaking Crowfall's physics, which will create emergent game play opportunities when combined with the voxel crafting and destruction systems.. "There've been some MMO's with some physics things in them before, we're kind of going to another level of freeform with that," Walton said.

In the meantime, Walton and Coleman are still forging ahead with the Kickstarter campaign, even in its final days. "It's gone better than we could've hoped so that's amazing and we should first say thanks to everybody who's even checked us out... especially our backers," Coleman said. "Don't count us out yet just because we've already overcome that target and then some, doesn't mean we're going to give up. Now's not the time to take the foot off the gas, now's the time to kind of double-down."

With only five days left in Crowfall's campaign, it's entirely possible to get a final burst that will knock out several stretch goals - including mounts and virtual reality support. But to Walton and Coleman, the important factor will always be making a game that stands out among any MMO on the market. "The players that want this experience - our bet is that 9 out of 10 of those players have never even heard of us [yet]," Walton said. "We also think about our players as people who are looking for something that's not out there. So if you're not satisfied with what you're getting, or it's become stale over time, we might be the right place for you."