TE: Let's get to your specific Twitter controversies. I'd like to start with the "mansplaining" controversy. You called it a sexist word and I believe there were two big articles written because of that. 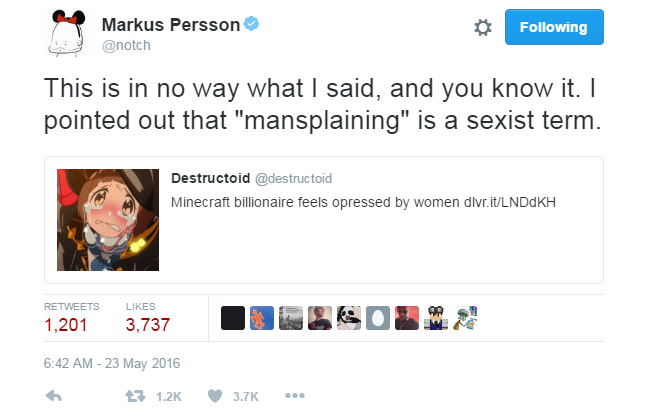 MP: Oh yeah I've definitely seen it happen. My point is that you can't have the cake and eat it too. We have to be equal and we have to treat everyone as individuals. You can't just go, "men are over-represented when it comes to murders" and assume that every single man is a murderer. Instead of calling it murder we don't call it man-killing. It's still murder. We have perfectly good words already for this, like condescending. And then you have this term mansplaining, which is inherently sexist, but it's apparently OK to be sexist against men because we hold the power or something?

TE: Then you came up with the phrase, "ovary-acting".

TE: Oh was that yours?

MP: Yeah that was before I realized how bad the c-word was. And it's not that good of a pun. Ovary-explaining is way better. I should have come up with that instead.

TE: Because of that you had what can only be called a hit piece written about you in Destructoid, claiming that you "feel oppressed by women."

TE: Did they try to contact you at all?

TE: Did you read the article?

MP: I kind of started reading the top of it and skimmed through it. I usually don't read anything about me, even if it's good, because it makes me want to second guess myself all the time. I think I had to kind of just hold my nose and read part of it so I could see the weird angle they were taking so I could reply to it. It was kind of liberating in a sense because when that happened I realized nothing actually changed.

TE: Nothing changed from when to when?

MP: From like my actual day to day life. I could still turn off the internet. I could play board games with my friends and then we're just playing board games. Before that happened I was like, "oh god I hope there's not a hit piece" or whatever. And when it happened I was like "oh, this is fine." And most of the people who follow me on Twitter seem to be on my side anyway. 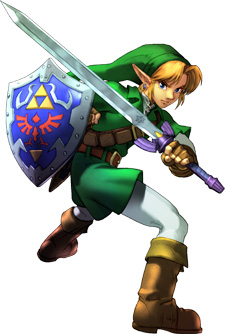 TE: Now let's talk about the censorship controversy. You talked about self-censorship. People were wanting Nintendo to make Link a woman and you talked about that on Reddit. How is it censorship for people to demand Link be a woman?

MP: Well you phrased it correctly yourself. You said "demand" to be a woman. Then you are making demands for people to be making sacrifices to their own artistic expression. I think it's very fine to teach people about issues that are going on in society. Even if they're not real, if you think they're real then they're important. Like a long time ago I stopped saying "he" about an unknown person. I'll say "they". And that just makes so much sense to me because I understand the reason why you would do that. But for me, also, Zelda is not a game about genders, anyway, so just flipping the gender doesn't really matter at all to me as a gamer. I understand why you would want to do that as a symbol or gesture, but demanding that other people do it on your behalf is kind of weird. For me it would be way more interesting to flip the roles of Zelda and Link. You could have the female protagonist and the male guy trapped in Gannon's castle or whatever, and that would be very interesting because then you flip the roles and you have something new happening in a Zelda game.

TE: So it's OK with you if people request more female protagonists in general?

MP: Yeah, like in a general opinion piece about it or if you have a good converation about it. The problem is the entire discussion has become kind of infected, like the Tracer thing in Overwatch. The original post wasn't like a demand or anything like that. It wasn't about demanding change, it was just a weirdly overly sexual pose for this playful girl character. And they agreed that it didn't fit her persona. Then of course that exploded everywhere because people don't want them to have to change the game just because Tracer has a sexy pose. So the actual original complaint wasn't that bad at all. It's just become so infected and it's hard to even have any good conversation about it. I think when they changed her pose to an actual pin-up pose I thought it was very, very good, because they sent a clear message that this is not about not making her be sexy. But it's also a clear message that this was more in line with her playfulness. So they agreed it was just like a generic, standard pose they had and they changed it to a pin up, kind of playful. They came up with a perfect solution to that situation, which is impressive.

TE: You've talked about intersectional feminism on Twitter. You called it, "a framework for bigotry." Could you explain that?

MP: Well the idea of some people being more privileged than other people because of their physical traits, then you assume that everyone who has those traits is more privileged than everyone else who doesn't have those traits, which is straight up bigotry. Not every white male is going to earn more money than every black female. As a group, on average, sure. But it's so easy to slip away from the concepts and the trends in society and to actually go, "stop mansplaining." I agree that mansplaining is a thing that happens, but you're using that as a tool to shut me down, just because I'm having an opinion, not even in a condescending way. Then you're taking this framework that's been built up for something completely different and it's so easy to misuse it to start attacking individuals instead of the groups.

TE: You've also received criticism from the other side when Anita Sarkeesian, who is an intersectional feminist, took a picture while at your house at a party. So some people were saying, "don't give in to the feminists!" Have you watched her Tropes vs. Women in Video Games series?

MP: I watched part of one episode. For me the cultural implications of games and media, I'm not really interested in that. I prefer physics. I understand that it's good to talk about, and as I said, discussion about these things is why I stopped saying "he" for an unknown character. So I think the discussion is good but it's not really my type of thing. I made myself watch some of one episode. But I didn't directly invite her. She was a plus one of a friend. She showed up and we had a conversation of maybe 30 seconds. She was very polite. I was very polite. We never even discussed the fact that we have differing political views (probably, since I haven't watched her videos). And to me it was just like meeting a normal human being. You don't discuss politics with your parents, either. People are people. She was very nice. People go like, "oh no she snuck in she wasn't invited!" Well, none of the plus ones were really invited.