TE: That's it for the Twitter controversies. In your farewell letter after selling Minecraft, you said, "If I ever accidentally make something that seems to gain traction I will probably abandon it immediately." Is that still the case?

MP: No I don't necessarily think so anymore. I am terrified of getting new responsibility for a game again. It's so tempting to keep doing it once you're there, because you have fans you don't want to let down and the instant feedback is a little addictive. And it feels fun for the moment. But then it inevitably makes me feel almost like I'm in a relationship that I didn't intentionally want to get into and I let everyone down and it gets so high pressure. 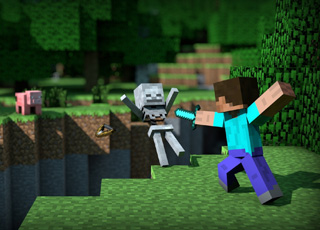 TE: Yeah you talked about that as a factor in selling Minecraft. Is the opinion of fans and their demands, does that weigh you down?

MP: No, not really at all. But I still want to make the best game I can make. Was it [Henry] Ford who said if I ask people what they wanted they would have said faster horses?

TE: Yep. [Note: it appears that quote has been historically misattributed to Ford].

MP: I think that's kind of common in a lot of game developers, but not in an upset kind of way. You have to listen to what people actually say they want, but you're the one making the games. Maybe you played so many games and you understand games and you have this idea on how to be innovative. So you have more understanding of how to progress the medium. So it's not like I feel there are demands from players on what to do with my games. It's more that I feel I have a responsibility to distill what they're actually asking for, or what were the areas that bothered them. And then I want to make the best game I can, because it's fun to make a great game.

TE: I saw you had a conversation on Twitter with a guy talking about you being the first to release a game in alpha and that has started a trend of people releasing unfinished, buggy, sometimes bad games. The guy said you were responsible for that, because Minecraft was like the first successful one. Do you feel any responsibility for that?

MP: No, the reason I to do it was because I saw Cortex Command doing it and they got it from someone else as well. And I was thinking about why so many indie game developers just go broke. And I also started thinking about my own behavior and how I make games, because I would never actually charge for a game and ask for money. I have this pride that I want to have a finished product to sell. But I saw in Cortex Command how they got the community involved and I thought if I start charging early maybe that would work. It turns out it did. I don't think I would have finished Minecraft if I hadn't started charging early. So I think it's cool we have this option now and that people still, despite several failed launches, will still buy into it if it's something they care about. For me the best possible example is FTL, Faster Than Light.

TE: I see you talking about that quite a bit.

MP: It's the most adorable little board-gamey...

TE: That game frustrates the hell out of me!

MP: Oh yeah and then you see people doing no-pause hard runs on Twitch. The game is so dripping in mood and atmosphere and amazing music, and it's something that would have been hard to pitch to a publisher.

TE: Have you unlocked all the ships in FTL?

"I feel a little bit like Truman at the end of The Truman Show when he walks through the set. Everything is completely different now."

TE: OK, the big question: are you working on anything now?

MP: I am working on something but I try not to show anyone anything.

MP: Yeah, that's what I find the most fun to do. So yeah I'm working. People complained I made Minecraft in Java. This new thing is in JavaScript (laughs).

TE: That will be interesting.

MP: Yeah there's something about the ridiculousness of taking the longest possible path. It's fun!

TE: We spoke earlier about you figuring out the next part of life after the sale. Have you figured it out? Are you working on figuring it out?

MP: No, but I think I've gotten used to not having it figured out. I think humans tend to really enjoy having some kind of habitual role that you play, and when you're able to do whatever you want you lose that part of it. But I think it's also because you're used to knowing what you're supposed to do. As long as you're willing to accept it, then it's kind of fine. This is such a 1 percent-er whining thing. You have to develop different techniques for motivating yourself so you don't just sit in your underwear and do programming for a week and then everything is horrible. So you have to develop these new techniques. You can't rely on the alarm going off and you go in to work in the morning. It's more about getting used to not necessarily knowing what I'm supposed to do.

TE: A lot of people seem very concerned about whether you are working on stuff or whether you have goals in your life. I saw in a Forbes article they called you "washed up" because you didn't have goals, you didn't have a project. Do you feel like you should be looking for one? Or have you just accepted it?

MP: I feel a little bit like Truman at the end of The Truman Show when he walks through the set. Everything is completely different now. I'm kind of nihilistic. I don't necessarily believe any of this is real. I kind of feel like "real" is a made-up word, because that just means we have a subjective reality we're part of. I mean yeah, obviously, everything does. But that doesn't mean we're any more real than any other mathematical possibility. So I'd probably say I'm atheistic plus? I don't feel like there's any purpose to anything that's going on. I try to stick to the life model of "do whatever makes a better story," because when I'm gone all that's left will be what happened and what transpired. If I try to make that an interesting story then I've done the best I can, I think. So I don't feel like there's anything I'm supposed to do. And when you don't have the framework of day to day life to know what you're supposed to do then it's very easy to just binge all of Breaking Bad and not exactly doing whatever makes the better story. So I don't know if I'm washed up. I've definitely managed to let go of running a corporation and having employees, because I realized I never actually wanted that. It was something I had to do because Minecraft became so big. But programming? Yeah I do that all the time.