TE: OK now we'll move on to our lightning round!

TE: Have you ever eaten surströmming? 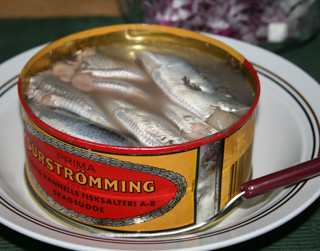 MP: Yes, once as a kid and I don't remember if I hated it or if I just pretended to hate it because it's supposed to be disgusting. Jakob [Porser] who was part of Mojang when we sold the company wants to get me to eat surströmming again. I think I'll have a fairly boring reaction to it because I've started eating basically anything.

TE: How awful is Norway?

MP: (Laughs) So a couple years ago we had the hundred year anniversary of when we separated into two countries. In that document it said something like we'd do a trial separation for a hundred years and then we'd renegotiate. And we just went "pssh, why should we bring that up, of course you're your own state", and nobody even thought about it. Then I kind of thought, "well they have a lot of oil." Actually I'm really fond of Norway.

TE: It's a really great rivalry.

TE: As a rich guy who knows what it's like to be poor, when you look at the prices of things now are you still in the poor mindset? Do you still think "whoa that steak is $200!"?

MP: Oh yeah, oh yeah. Not because I feel like I can't afford it, but I feel like I'm getting bamboozled. "OK, come on, how good can a steak possibly be?" Then if there's a really good salesman who tries to sell me on the steak, then I'll probably try it. If it's not that overwhelming then I probably won't try it again. But I kind of keep way more track of the actual prices of things than I thought I would. Because I thought of "am I aware of the cost of a loaf of bread?" as one of my reality checks. And it turns out I kind of am keeping track a little bit.

TE: Can you cook?

TE: What about Swedish meatballs?

MP: I can buy them frozen and put them in a pan until they're no longer frozen. Surprisingly tasty.

TE: You're well known for your love of electronica. What kind of music can you not stand? Any music genre you don't like?

MP: That's probably one of the most distant to me. Jazz, that I joke about, as well. But it's not that there's anything I think is wrong with the genre. I've just never grown any appreciation of it. If I'm drunk then I'll probably enjoy any music. One of the best effects of alcohol is that it makes music amazing. I remember I was in Cleveland for St. Patrick's day in a bar with people playing the fiddle, live, and like the harmonica. And it was amazing because of the vibe and people getting drunk to really ridiculous, weird music.

TE: You've met a lot of celebrities. Have any made you particularly star-struck?

MP: John Carmack's probably been the most intense.

TE: That's such a geek thing to say!

MP: (Laughs) Yeah but I would dream for years as a kid (that was a long dream!) about making the DOOM engine. Not that I invented it, but just being able to recreate it and understand it. That's been kind of my go-to thing. And I think now I've written that engine twice from scratch without looking at the source code, just looking at the file format. So yeah, meeting John was intense.

TE: Time to get you in trouble. PC or console?

MP: For me, probably PC. I feel if you have a few friends over, popcorn and beer, then you probably want to do the console. I remember getting drunk and playing Mount Your Friends. It was extremely fun but hard to do on the PC. But for me I kind of just prefer sitting on a computer talking on my headset, kind of just in a room.

TE: Do you ever join multiplayer games, like Rocket League?

TE: Now everyone is playing Overwatch, of course. 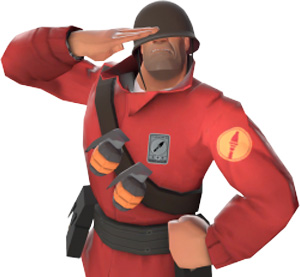 TE: What was your class in Team Fortress 2?

MP: Mainly soldier. Valve made me a hat, a custom hat for all the characters which is based on a cube, like cardboard. So people recognize me, and I get 2 or 3 pocket spies and 2 or 3 pocket medics. So I played like a different game than most people. But I don't spy check at all. I'm way too trusting, and I like shooting rockets, so I'll be shooting rockets and do really well and get stabbed in the back.

TE: Did you have rocket jumping down?

MP: Oh yeah, definitely. Which is why in Overwatch (Team Fortress 3) I like the design of Pharah because she's like this noble flying, harasser, kind of similar to the soldier. I try to keep the height advantage in stuff. It's fun. But her ultimate skill is she freezes in place and shoots very inaccurate rockets. For me it would be so much more fun if her ultimate skill was something a little bit more mobile. So I suggested having like a ground slam. You fly down and from the higher up you are the more damage and knockback you do when you land. So you sacrifice your altitude for knockback and damage and then you get stuck down on the floor for a while. That would make it more like, 'OK I need to get down now" so you use the ultimate, or you can go like, "oh I'm about to knock them all off" and use that if you're higher up, and that would feel so much more in tune with the character than the actual freezing in place and shooting.