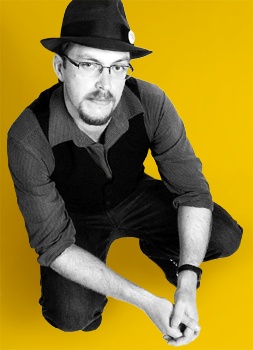 It's no secret the popularity of The Escapist exploded with the arrival of a certain Englishman with a sweet hat. While we could certainly make the case that without the excellent foundation of quality we'd built with the rest of the content on The Escapist or our innovative web design features, the site as a whole would not have evolved into the massively popular juggernaut that it is today, no one can deny the popularity of Zero Punctuation in and of itself. And for that, we have Ben "Yahtzee" Croshaw to thank.

Yahtzee is a unique talent. I've been his editor at The Escapist for almost two years, during which I've gotten to know him fairly well, considering we live 14 time zones apart. He's one of those rare individuals who can shine at pretty much whatever he puts his mind to doing, and these days he's doing a lot. Aside from Zero Punctuation, Yahtzee is shooting television pilots, working on writing projects, developing videogames and, of course, enjoying the lifestyle of an internet celebrity playboy. Or something. But he's still best known for the snarky, insightful videogame review series that introduced him to the world and helped usher The Escapist into a whole new era of internet media dominance.

In the interview, Yahtzee talks about what it's like working with The Escapist, how fame has changed his life, why gamers like dick jokes and what happened to that girl he broke up with, prompting him to start making videos on YouTube.

RP: Zero Punctuation will air its 100th episode on August 5th. Did you ever suspect there was such an insatiable appetite for intelligent, multi-layered videogame commentary peppered with occasional dick jokes?

YZ: I knew that there were plenty of game reviews in the world, and I'd read enough British newspapers to know that the media is never unbiased and trustworthy. And I knew that there were things like Penny Arcade where people could go for more honest, personal commentary on gaming. I assumed that niche was filled. I could never have anticipated everything that's grown up around ZP by now. As for the dick jokes, I guess people can just never get enough. Like Pringles.

RP: You've stated in previous interviews that you were motivated to create the videos that became Zero Punctuation out of the boredom following a breakup. Can you tell us what happened to the girl you broke up with? Is she pulling her hair out these days, ruing having ditched the "Man Who Would be Yahtzee"?

YZ: I'd been with her for quite a few years in a state of relationship stagnation where neither party was particularly interested in the other anymore, but routine was too deeply established to break off. We were both just kind of ... there, I guess. I eventually realized I had to get out or I'd go insane. We haven't spoken in a while. She's sent a couple of texts but I've got no idea what to say. "Hey, life's much better since I left you, thanks a bunch?"

Anyway, I'm single now and perfectly happy. I don't seem to have any desire to enter another relationship, and that feels quite liberating. You're never alone when you're totally self-absorbed.

RP: From day one, you've enjoyed a fairly positive relationship with the developers' whose games you eviscerate on ZP. Why do you think that is? Are they just gluttons for punishment?