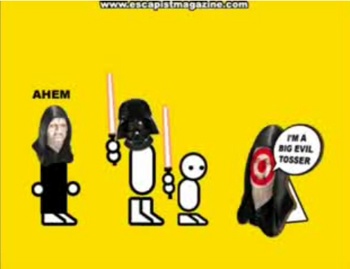 And of course the editorial freedom is very nice. A story I like to tell is when I first started with The Escapist and I asked [you] if [you] wanted me to cut down on the swearing and risqué gags. [You] replied with just one word: "No." So ever since then I've diligently censored myself as little as possible, no matter how many whiny bitches bleed out their cunts.

RP: You've made some snide comments about videogame fans in general and your own fans in particular. How do you really feel about the fans, and why?

YZ: I seem to have gathered a reputation for being a jerk in real life, because frankly fans make me uncomfortable. Complete strangers come up and talk to me like they've known me their whole lives, and for that reason I can seem a bit stand-offish. Some of them seem so awestruck. They're just knob gags, guys. You imagine things that would be funny if a knob was put in them, and then you write it down. It's not like I'm revolutionizing global culture.

No, the whole "fan" thing confuses me. I like things. Maybe you like the same things as me. That's cool. But I like a lot of things and it's almost certain I'll find other things some day that are even better than the things I currently like, so getting attached is just weird. I've seen guys who get ZP tattoos. It would be instructive to wait and see how they feel about that 20 years down the line.

RP: One thing most audience members don't fully appreciate is exactly how difficult it is to stay motivated to keep playing a new game every week. How do you stay positive about that part of the job?

YZ: Yes, that's always the trouble when something you love becomes your job. That's exactly what it becomes: a job. Sometimes I'll put off starting a new game for days, procrastinating with internet videos and work. That's one thing I miss about my poverty days: constantly replaying a small handful of titles and learning their every slightest nuance inside out.

Every now and again, though, I find I have enough time to replay something, and often I'll find myself with a weird urge to play an old review game I might even have completely trashed. Alone in the Dark, for example. It was so broken it could barely limp, but there was so much potential there it makes me want to cry. It's nice to take time out to revise your internal game database now and then.

RP: If you could start over with ZP, what would you do differently?

YZ: Like a slightly brighter shade of yellow? I dunno. It's a difficult question. So far nothing but good has come out of ZP - I'm not sure I'd want to meddle with causality. I guess my biggest regret so far is picking up the Wii version of The Force Unleashed rather than the PS3 one. Christ that was stupid. But hey, there's still time.

Note: This interview originally ran in The Escapist's celebratory PDF of Issue 210, which you can download here.

Yahtzee is a British-born, currently Australian-based writer and gamer with a sweet hat and a chip on his shoulder. Catch a new Zero Punctuation video every Wednesday, only at The Escapist.