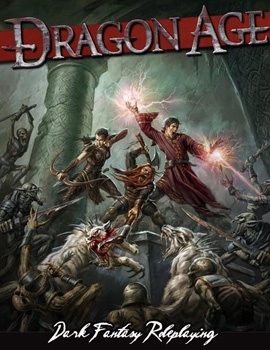 Bioware's Dragon Age: Origins promises to be the most exciting new computer RPG release of the year. But Dragon Age isn't just coming to computers and consoles: It's a tabletop RPG as well. We sat down with Chris Pramas, the designer of the upcoming pen-and-paper version of Dragon Age by Green Ronin Publishing, and talked tabletop.

How long have you been doing tabletop games, Chris?

I've been working in the hobby game industry since 1993. I have worked on many RPGs over the years, from the Whispering Vault to Dungeons & Dragons, and I designed games like Warhammer Fantasy Roleplay 2nd edition, V for Victory, and Dragon Fist. Today I'm the president of Green Ronin Publishing, which will be celebrating its 10th anniversary next year.

And Green Ronin is, arguably, the most successful new entrant into the tabletop roleplaying game industry since White Wolf. You've published Freeport, True20, and Mutants & Masterminds, and secured two very sexy licenses, A Song of Ice and Fire Roleplaying and Dragon Age RPG, at a time when even long-established companies have been on the decline. Any advice for readers interested in entering the tabletop gaming industry?

If you have the passion, just go for it. The industry has changed a lot since I got into it, largely as a result of technological innovation. It's much easier to get your own company going than it used to be because you can start publishing electronically with little more than a copy of Adobe Acrobat. When I started my first company, you couldn't do an economical print run of under 1,000 books and then you had to get your stuff into distribution if you wanted anyone outside con attendees to see it. Now print on demand technology is such that you can take your PDFs and make nice looking printed versions in small numbers with little risk. You can sell those books and the PDFs direct to consumers or through sites like RPGNow and Lulu.

So if you are willing to do the work, you can get your own company going. Then concentrate on putting out quality material and building a reputation for it. So many of the opportunities that have come along for Green Ronin have followed from that.

Speaking of opportunity, tell us a bit about how you secured the Dragon Age RPG license and what we can expect from the game.

It was pretty simple. BioWare came to us and said, "How'd you like to do a tabletop RPG based on our upcoming Dragon Age: Origins game?" I had enjoyed the hell out of games like Baldur's Gate and Knights of the Old Republic, so of course we said yes.

The computer game has been described as BioWare getting back to its roots, and I think they saw having a tie-in tabletop RPG as a way of reinforcing the "old school" feel of the property. I had been doing a lot of thinking about the roots of RPGs and how the games have changed over the years, and I had started writing notes on a theoretical class and level fantasy game based on my analysis. It was really just a thought exercise that I didn't expect to actually make into a game. When the Dragon Age project came along though, I realized that a lot of my ideas would work perfectly. So instead of using one of Green Ronin's existing systems like True20 or A Song of Ice and Fire, I thought we should create something new and that I would do the game myself.