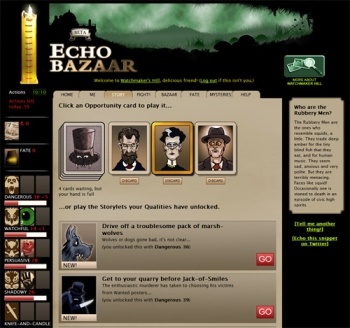 It's hard to know just how to describe Echo Bazaar. Set in the world of Fallen London, it combines elements of tabletop gaming, Victorian England, RPGs, and social networking. Sporting a cheeky sense of humor and a Lovecraftian vibe, the game combines the addictiveness of grinding with an unusual and compelling story elements. While its browser-based gameplay is certainly quite entertaining, Echo Bazaar's real appeal lies in its robust mythology and surprisingly deep backstory, which you discover bit by tiny bit as you play. The world of Fallen London is a joy to explore, a weird and wonderful playground where clay men wrestle in pubs and you pay for your lodgings with cryptic secrets.

To find out more about this intriguing and addictive browser game, we spoke with the duo behind its creation: Alexis Kennedy, Chief Narrative Officer, who built the site, wrote the bulk of the content and "did the original vision thing"; and Paul Arendt, Creative Director, who designed the site and does the artwork. (And before you ask, no, we're not related, at least as far as I know.)

Part of what makes Echo Bazaar so enjoyable is its rich mythology. How did you decide upon the location of Fallen London? Which came first, the setting or the gameplay?

Alexis Kennedy: The gameplay. Echo Bazaar was originally a much smaller, very different game - a sort of predictive market in guessing what phrases people might use on Twitter (market=Bazaar, Twitter=Echo). It was basically intended to fund and get press for Prisoner's Honey, our next project.

I added some flavor about a subterranean market and asked Paul to draw some icons in his spare time. But the game was turning out very dry, so I kept adding narrative elements and eventually we went the social RPG route, and then it all got rather out of hand.

Paul Arendt: It wasn't even London, originally. It was this very unspecified place and time deep under the earth. But Alexis would explain it to people, and they would just go, 'Wot?'

AK: So we thought, well, we've stolen the flavor of Victorian London, why not steal the whole city? I'm glad we did.

Echo Bazaar feels very much like a tabletop game. Were they an influence on its creation?

AK: You've uncovered my sordid past. Twenty-five years behind the GM screen, man and boy. I stopped when I realized I was never going to finish any other projects when all my energy was going into running games. Nigel Evans and Chris Gardiner, who've contributed content, are also veteran tabletop gamers.

What were some of the inspirations for the art style or storytelling style? (Books, movies, other games, etc.)

PA: I bloody hate Tim Burton! You just can't do cartoon-Gothic-horror-with-period-stylings any more without someone yelling "Tim Burton!" at you. If anything, the look of Fallen London was more inspired by Francis Ford Coppola's Dracula. Spooky but silly, serious but camp. Gary Oldman in a top hat and sunglasses is never far from my mind. I'll second Peake as well: his drawings are amazing. The big Echo Bazaar banners were more than a little influenced by Braid.

AK: People keep bringing up China Mieville, but I always think he'd despise us for being so very far from gritty.

PA: We get a lot of people name-checking Lovecraft too, but we're more comic horror than cosmic horror really.

AK: I can't properly deny either of those though. Paul and I also both play a lot of CRPGs. Planescape: Torment is a long-time inspiration, of course. I realized a week before launch that I'd accidentally stolen one of the better jokes from there, and hastily took it out before anyone noticed.