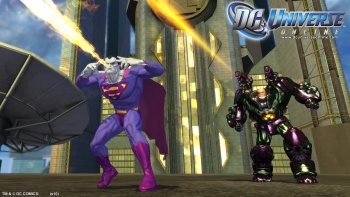 DC Universe Online is a novel approach to the MMOG. Sony Online Entertainment began developing it over five years ago, probably in response to City of Heroes, but somewhere along the line, DCUO became an action game. There is no targeting and you can only have six skills "equipped" at a time. DCUO is designed to be played with a console controller, and will be released on the PS3 and the PC on November 2nd. With the likes of Mark Hamill, Gina Torres and Adam Baldwin (The man they call Jayne), the voice acting will be top notch. And if that didn't set it apart, DCUO actually has a story that explains why there are so many superheroes and villains running around beating each other up.

"Essentially, Brainiac has the ability to absorb all the super powers," Marv Wolfman tells me at the SOE press event after the unveiling of the trailer at San Diego Comic Con 2010. Wolfman made sure to note that this story was devised by the lead writer on the project, DC writer Geoff Johns. "The heroes in the trailer [Batman, Superman & Wonder Woman] are all murdered. [Lex] Luthor realizes that Brainiac has caused more trouble than was expected and goes back in time to use the energy that Brainiac stole from the heroes to empower people today to help the superheroes avert the future crisis. Why is Luthor doing it? Is he doing it to actually help the heroes and the world? Or is he doing it for something else? That's part of the story."

If you wanted someone to provide believable storylines for an MMOG set in the DC Universe, you couldn't find a better writer than Marv Wolfman. He began writing at DC in 1967 before moving on to Marvel in the seventies, where he created Blade and Bullseye before becoming the Editor in Chief. In 1980, he came back to DC and wrote the new Teen Titans and the Crisis on Infinite Earths story arc, as well as many other ideas that we now take for granted.

"The version of Lex Luthor who is the businessman was mine. He was always a mad scientist before, and I turned him into the businessman," Wolfman says. "I can honestly say this, it's hard to believe but I can prove it. I've written Superman for six decades. There's no one else who can say that. So I'm pretty close to the DC Universe."

Wolfman is also a gamer. "I started with coin-op games and then got a Colecovision very quickly. Currently, I've got a PS3, PS2, Xbox 360, a Wii. My absolute favorite game of all is God of War. I loved it so much that when I heard that DC was going to do the God of War comic that I had to fight for a year to make sure that I was assigned to it," Wolfman says, although it's hard to believe he needs to fight for anything. He also plays all kinds of MMOGs but perhaps familial connections means more. "My wife is lead producer for the cinematics at Blizzard, so I think I know those characters."

What is going to set apart the missions that Wolfman (who wrote several hundred of them) and the other writers have created is that are on par with comic book stories. "What I tried to do was to not think about writing it as a game, I actually thought of it as 'What would happen if I did this in a comic? Where would I go with it as a comic?' If I was doing something with the Flash, it had to be perfect for the Flash. It made so much more sense if Gorilla Grodd is turning people into apes, or biologically retrogressing them into cavemen, that would be a very much a Gorilla Grodd-type story," Wolfman says. "Once I come up with the plot, I'll put in a few lines that might make it a videogame story, because comics are just pictures and videogames are about movement. But the core concept of each story was 'What would I do in a comic?'"