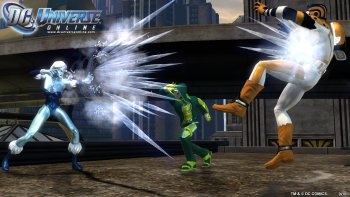 On the gameplay side, Chris Cao is working to make a truly action MMOG, as opposed to the standard fantasy MMOG like World of Warcraft. "I was the lead designer on EverQuest 2 so I understand really well how to make a good traditional MMOG. They allow you to have a sort of turn-based tactical, more stepped back fell to it," Cao tells me. "With a superhero game, you can't do that. Other MMOGs have done that to some success, but they've been hindered because they didn't go fast enough, they didn't honestly build an action game from the beginning.

We actually hired an action team. We hired guys from God of War. We fused a team with our MMOG expertise and action game expertise and said, 'Ok, we need to build a game, it isn't a hybrid, instead it's a superhero MMOG.' Day one, you have to have action combat. The whole thing has to stand on it. If you're going to be credible as a superhero MMOG, which is a game where you get to be a superhero or a supervillain, then you have to feel like it. You can't fake it."

While that all sounds great, and may just be the trump card that will set DCUO's gameplay apart, I wondered how the combat will accommodate the holy trinity of MMOGs. How will it be fun to be the healer in such a setup? Chris Cao responds:

We have these core roles, we call them the Defender, the Controller and the Healer, but they have an action game spin to them. The Defender is a tank, that's what an MMOG guy would call them, but an action game guy, he's tough, he can take a lot of blows, and he can control the scene. The Controller can control it even further, using traps or tricks or illusions to control the scene, lock guys down or make them do things they don't want to do. The Healer is interesting because you're not just sitting there watching bars. You have to be in the fight itself, because your healing is dependent on your fighting.

We really took a cue from superheroes and said 'Look, nobody stands in the back and doesn't do anything.' In a superhero game, everybody is on something all the time. So in our content, everybody is fighting all the time. Everybody is in the thick of it, throwing stuff around, blowing stuff up, and then they work together based on those roles. Think of it as an evolution, the roles will be familiar, but how you use them is going to take more action skill than you would ever have in a regular MMOG.

Because of the brawler mentality, working together in DCUO will be a lot easier because you can change your character's focus depending on the situation. Cao seems to have adopted Blizzard's "bring the player, not the character" mentality by allowing you to change specs before each fight. Every character will do damage, but there will be Defender, Controller and Healer builds for each hero and changing between them will swap out the 6 active abilities that you have available in the fight. The example that Cao gave was if you are playing a hero with ice powers, one build might have "cryogenic" powers which freeze yourself and give Defender-like abilities and another build might be "storm" which freezes others and acts more as a Controller.

With the great storylines supplied by Marv Wolfman, Geoff Johns, Jim Lee and the rest of the writing team, and the action game combat from Chris Cao and his team, DC Universe Online is looking extremely interesting. When it is released in November 2010 on PC and PS3, it could really be a blow to all competing action games, massively multiplayer or otherwise.

Greg Tito didn't actually know who Gorllia Grodd was and had to look him up.