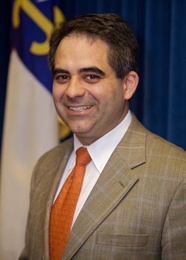 A former game developer is running for office as a Representative in the United States Congress and The Escapist sat down with him to pick his brain on his gaming cred, his position on the EMA vs. Schwarzenegger case and how Millenials need to mobilize and vote.

Thanks for joining us today, Representative Heagarty. You are to my knowledge the first game developer to become a legislator. While it's no surprise that those of us trained on Civilization and Populous would rise to power, it's still rare enough that we'd love to hear your story! What was your work in the game industry and how did you go from there to the North Carolina legislature?

Back in the early 1990's I was a dedicated hobbyist who thought that, with a little work with some programmer friends, we could launch a new company. We had some ideas that were ahead of their time, like distributing our games and add-ons over the Internet, but you have to remember that back then trying to move 8 megs worth of files over a 9600 baud modem was a killer. We produced a fast-action VGA game, but it was DOS based while the rest of the world was moving toward Windows. We made about nine bucks before the whole thing went to shareware.

Learning from that, we got out of sales and distribution and moved forward solely as developers, where we focused on translating classic table-top strategy games into a PC platform. I think we once pitched the game to some guys from Epic at a bar on Hillsborough Street across from NC State? We finally landed a great contract, but then our distributor, Avalon Hill, was bought out in the late 1990's during the battle for the rights to the Civilization franchise, and we found ourselves out of work.

After that, our group broke up and we went back to our day jobs. I've remained a beta-tester and board moderator a couple of titles, but otherwise have been away from the industry for several years.

Politics is a rough business. What was the biggest motivating factor for you to enter the legislature? What issues are most important to you?

RCH: I was appointed to House of Representatives in November of 2009 to fill a vacancy when the previous representative had to step down. I grew up in this area, and now have two young kids, so I want to make sure they have the same access to great schools and universities that I had, and the same great job opportunities. I want to make sure that they've got clean air and water, and a safe place to live. The same stuff any dad wants for their kids.

The two paths to this are jobs and education. We don't build good schools and universities by accident, and we don't attract world-class companies and develop innovative start-ups by chance. It takes a commitment to train students and workers, to give them access to the skills they need to work in emerging industries, like biotechnology and interactive digital media. It means making sure North Carolina is competitive with other states, and other countries, in how government treats key industries.

North Carolina recently passed a new law offering a tax credit to game developers working in North Carolina. I understand that you were a sponsor of that bill, and worked closely to get it passed. Can you tell us a bit about the credit, and why you felt it was important for North Carolina to support the videogame industry?

RCH: I met with members of the local Chamber of Commerce and the Entertainment Software Association to discuss ways to create new jobs and boost the businesses we have here in the RTP. The Chamber was really proud of our area's leadership in the gaming industr, and the impact of these great jobs on our local economy. I discussed these ideas with the state Department of Commerce, and senior legislators like Rep. Bill Owens, Pryor Gibson, and Grier Martin, and we worked together to craft a proposal to make North Carolina more competitive with other states that were trying to lure these jobs away.

It seems hard to argue: the RTP is one of the best areas in the world for game development, for both serious game engines and entertainment software. These companies produce high-paying, sustainable jobs in a growing sector of commerce. This is our chance to establish ourselves as the industry leader. These credits are a smart investment that will pay dividends and create jobs for years to come. But critics call them "special deals" and will try to repeal them next year. That's why it's so important to elect people who understand the industry.