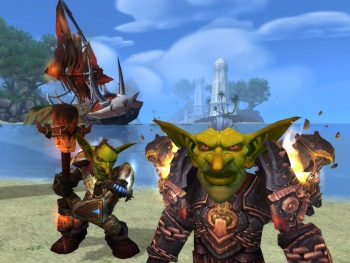 TE: I know right now the RTS team is hard at work on finishing StarCraft 2, and then we can wait for the next ten years or whatever. But do you ever think this could be a lead-off point for a hypothetical Warcraft 4?

GS: Honestly, it's not something we talk about a lot. Personally, the thing that I find appealing is that we were able to tell so much story in Warcraft 3, and a lot of the events that are going on in WoW are still going on because they were established in Warcraft 3. That's where players met The Lich King, that's where players met Illidan. The lazy designer part of me thinks that a new RTS would give us a lot of fertile ground introduced quickly that we can then exploit in the MMO part. I don't honestly know what the plans are post-StarCraft.

TE: You've managed to introduce a lot of new canon into the Warcraft universe via WoW, like Varian Wrynn and Garrosh Hellscream, who never appeared outside of the games at first. But, it's very interesting - there's a TV Trope "All There in the Manual," which is like what we have here, where Varian's backstory was heavily explored in the comic. Do you wish you could have somehow said all that in the game itself?

GS: If there's a way to say it, that would be cool. The tricky thing is we try to show, not tell, and we don't want to bury players in dialogue and cutscenes. Exploring that kind of history in detail works out very well in outside sources. It would be very hard to introduce a character with as much depth and backstory as we can do in other ways. We are getting better at it. There's a lot of cinematics in Cataclysm. There's Archeology, which lets you explore a little bit of the history that we are normally not able to do.

I think it's only unfortunate if players feel like they missed out on something. Like - "Oh, when did this happen?" "Oh, that happened in the book," "Well, I didn't read the book! It should happen for me, too."

TE: I had a friend who never read the comic say "Oh, Varian's kind of a dick." And she read the comic and said "Oh, I understand it now." That's the sort of disconnect that you want to avoid.

GS: I agree. I think we could have done a better job with Varian, but I think that Hellscream comes off really interesting in Cataclysm. I think players start off thinking "Oh, he's an asshole, he's going to ruin the Horde, this is going to be terrible." Then you start to play through and think "Orgrimmar's looking pretty good." And he's got the Alliance on the run in parts of the world like Ashenvale and the Horde has completely retaken - they won the Tarren Mill battle. Maybe it's not so bad. He's kind of doing a lot for the Horde, where with Thrall his people were living in the desert, starving, being on the run from the Alliance.

TE: But on the other hand, people have these huge attachments to characters like Thrall and Jaina - especially Thrall since he's going off and doing his own thing. Are there any plans for epic homecomings?

GS: *laughs* I think it's obvious that one of the reasons we set this up is to have a lot of fun in the eventual "What's this all going to lead to?" We have this rivalry now between the two Warchiefs, and how is this going to get resolved?

TE: Is that resolved in Cataclysm or is that down the line?

GS: Not sure yet. It depends a little bit on what the stories are that we have to tell. Obviously, Deathwing's coming at the end. We have a little time before that. Ragnaros is coming back. We just have to figure out how much time there is and if that's something we need to save for the future.