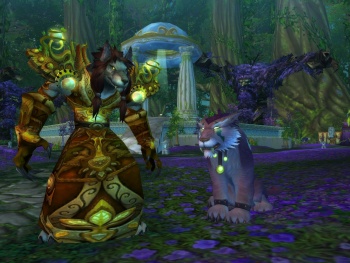 TE: Talking about storytelling in a multiplayer game. You built these characters, you built these storylines. While you have structure, they're fairly - they're more like general guidelines. Do you think that encouraging players to follow this storyline rather than making it mandatory - what I am thinking of is The Old Republic. It's heavily voiced, there are dialogue options, all decided ahead of time. Where's the impact of your character? How does your character impact a story that has to be pre-told, that is in a multiplayer context?

GS: I think the quest designers have gotten really, really clever in doing that. In the new Undead leveling experience in Silverpine, you're still really low level but Sylvanas has selected you - you're obviously someone that's going to do a lot in life (or death, or whatever). She takes you under her wing, and you're running missions for her and fighting alongside her at points and it's a pretty epic experience.

If you play WoW, you understand why that's a big deal, and even if you haven't played WoW, she's a pretty charismatic character and so it's cool to feel important at such a low level. The quest designers have gotten really good at making you feel heroic at low levels - and it's not just about killing boars, and it's not about just doing something important, even then.

TE: So many games start you off killing boars. On the other hand, there's the argument that so many people want to start off like they're living in a realistic fantasy world where sometimes you have to kill boars. Do you think that it's more important to provide a heroic experience or to provide a fleshed out, believable fantasy world?

GS: I think that heroic experience is more important. Even at low level. One of the worst things that can happen in MMOs is that you're playing it and you're not having fun and your friend is like "Oh, it will get better in about 36 hours." Dude, I do not want to play this game for 36 hours to find the fun, it needs to be fun immediately. So, the human start zone now in Northshire Abbey has minions of Deathwing coming in and - they're not Twilight Dragons, but they're orcs - and you feel right away like you're involved in the conflict. You're not just tending the farm.

TE: Not just "You no take candle, smash."

GS: Yeah, I don't think there are any kobolds left around Northshire.

GS: There's definitely a disconnect. That kind of weird stuff happens. It's part of how clever you can be, and in zones like Silverpine and zones like Redridge, we do a really good job of sending the player from place to place so they feel like as the story is advancing, they're moving. So, not only is the story moving along, but they're moving geographically too. So, if you see Sylvanas in this camp, and then in this other camp, you see a sense of progression instead of always running back and seeing "Oh, there's that guy that's on the quest I was doing an hour ago."