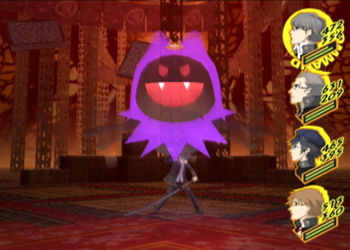 Kaneko: MegaTen games are designed so that the player's decisions as the protagonist determine the course of the story. Within that story are many characters-bad guys who oppose the protagonist and others who want to befriend him-and each of them has their own motivations. Frankly, that's how it is in the real world, too; I'd even go so far as to say that events in the world of Megaten are metaphors for the real world. So for those of you who played a MegaTen game when you were young, I'm sure you'll have a different experience if you play the same game now. I think that's why the fans have loved and supported the series for so long.

Like Western RPGs, MegaTen involves thoughtful choices with varying degrees of consequence. I had a recent experience with Nocturne where I had to agree or disagree with a philosophy representing power and hierarchy. While my choice didn't alter the overall plot, it determined if I would face a strong boss or a weak one. I replayed this part several times to experience all the potential outcomes but ultimately chose the more difficult boss (because fighting weak enemies wasn't satisfying to me) and the game rewarded me with more experience. As a designer, I thought this was very clever, and I think more developers should try harder to convey meaning and influence players' feelings using mechanics, rather than cut-scenes. How would you like to explore or expand upon elements of choice in future Megaten titles?

Kaneko: The branching storyline that's dependent on the player's choices is an established system, so I'd expect too many additional elements to cause an overabundance of choices in the game. One direction I'm considering is for each Megaten subseries to have a unique type of consequences for the player's choices and enhancing it in a way that suits that specific subseries. Another is ... The recent game console trends began changing the way people play games. I'm thinking it would be nice to incorporate that into the player's in-game choice-making, and thereby enhance the gameplay experience.

Megaten has used different ways of conveying a story experience to players. Some MegaTen games use voice dialogue, text, and cut-scenes, (Persona, Digital Devil Saga) while others are more minimalist, placing greater emphasis on the tone, atmosphere, and mechanics (Nocturne). Which narrative style do you prefer, and why?

Eiji Ishida: The purpose of each narrative style is a little different from others, so I can't simply compare them, but my personal preference is the minimalistic approach. I like the way it makes you feel that you're an active part of the story. The player should always be at the center of the story; event scenes with the subjective view of the player help maintain that feeling.

Also, this isn't about the visual aspect, but I like the dialogue-style storytelling very much. (We made an effort to do that as much as we could when we worked on Strange Journey.) When the players are confronted with questions and choices that shake the very reason for their actions, they think, "Man, what should I do...?" Those tense moments when the players are sucked right in to the game are, to me, the pinnacle of in-game storytelling. On a side note... In Fallout 3, I just couldn't decide on what to do at the Tenpenny Tower. I finally made up my mind, and later... I really regretted it. But that's what I'm talking about! You can only get that kind of experience from event scenes in games! It's so awesome!

MegaTen has a reputation of being very challenging. In a typical game, there are hundreds of demons, diabolical bosses, and tons of player skills and stats spread across dozens, even a hundred hours or more of gameplay. How do you pull off this big balancing act so well and keep the experience fresh, engaging, and challenging over such long periods of playtime?

Ishida: I believe that for any challenge, the important thing is to make both the goal (the reward for overcoming the challenge) and the means to achieve that goal clear to the player. It's really basic and nothing out of the ordinary. However, I think that is the single most crucial point when developing games; it's what gives the players the feeling of accomplishment. Strange Journey consists of many different systems, but the game is designed so these systems form a lattice toward one goal: to defeat strong enemies and conquer tough parts of the dungeon so the player can move on. As long as the goal and the means are made clear, the players can control the process to their liking. That makes the process itself an enjoyable experience, and when the players achieve the goal, they get a strong sense of accomplishment. (If you just wander around a maze and reach the goal by chance, you won't accomplish anything and it's definitely not fun, right?) The secret to keeping the player's interest level and motivation high is to provide them with lots of objectives, and make sure the game systems that let the players achieve those objectives function well. I'm sorry my answer became kind of conceptual, but if I go into details of each system, this interview will turn into a book... But hey, if you think about it, you can see how the concept of "a goal in sight allows you to try hard" applies to both games and real life!