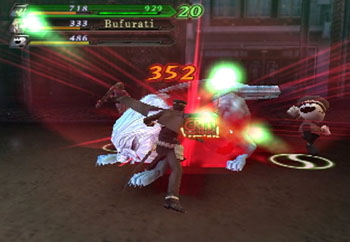 One of the things that I love about MegaTen is the boss fights-they are diabolical opponents that will exploit errors and crush you for mistakes. However, even in defeat, it feels fair, and when you figure out the right strategy, it's very rewarding and addicting. How do avoid frustration and achieve this balance?

Ishida: This will be a continuation from the previous question, but regarding Strange Journey's difficulty level, the staff and I focused on one thing: to clearly show the players the reason for losing the battle. If the players can analyze the battle and understand why they lost, they can figure out how to win the battle, and, as I said in the last question, they can control the process to victory themselves. So... To achieve that, we decided to implement a simple paper-rock-scissors style battle system where the outcome relied heavily on the preparation made prior to the battle, not the tactics. We designed the system so the players would think, "I lost because I didn't plan out my party right... I'll work on demon fusion and make a demon that helps me win the battle!" Yes, in Strange Journey, it's not the battle that the players need to put their thoughts into, it's the demon fusion! If we made the battle system as complex as the demon fusion, the players wouldn't be able to tell the cause of their defeat-whether it was their demons, or something they did wrong in battle. If they don't know why they lost, they can't accept their defeat, and the battles simply become too much hassle for them. Since we wanted the game to revolve around demon fusion, the battle system ended up being quite simple. But keeping the battles simple enabled us to make the gameplay surprisingly straightforward, logical, and deep.

What did you learn about user interface design from developing SJ on the DS, and how do you think this will benefit future MegaTen games?

Ishida: The biggest advantage the DS has over other systems is that you can use one of the two screens purely for displaying data. It allowed us to keep things like dungeon maps and enemy information on display at all times, which led to stress-free gameplay. But it also meant that until now, we had been designing the game interface, which relied on the players' memory, forcing them to not concentrate on the gameplay fully. Comparing a one-screen system to a two-screen system is a bit too extreme, but being able to realize that was a huge plus for me, as an RPG developer. From this experience, I learned to be strongly conscious of the players' data processing load, when designing the game interface.

Do you play other games? If so, which ones do you enjoy, and why?

Kaneko: I play different kinds of games, but I play games like Tetris the most, where I keep doing the same thing over and over and try to get a high score. I guess I get more enjoyment out of beating my own score than competing with other people. I also like first-person and third-person action games. I'm a big military fan, so I really get into games that pay meticulous attention to firearms and gears. I've been wanting to make a MegaTen game like that, but such an undertaking is difficult to carry out... It's frustrating.

Ishida: I most certainly play other games! I recently finished Red Dead Redemption. While I was shocked by the final portion of the story, I was deeply moved by the development team for making the decision to go with that ending, whether the players praised it or disapproved of it. As for the kind of games I enjoy, I like games with dynamic visuals and totally immersive gameplay. In that sense, Red Dead Redemption was just perfect. Besides those, it's hard for me to keep my focus on one thing, so I love games that give you lots of freedom and choices. I start doing one thing... but when I get bored, I can try something different... That's definitely my kind of game.

Is there anything you can share with your fans outside of Japan to give them something to anticipate? For example, what new technologies interest you? Do you have a vision of how Megaten will evolve? What kind of work would you like to do next?

Kaneko: It's hard for me to answer this question, but... As I said in the previous question about giving players choice, recently there have been changes to how we play and enjoy games. I do like to address that.

Ishida: I'm sorry to say I can't disclose any information about our ongoing projects, but I'm personally interested in AR (augmented reality) technology. You go out, and when you see through a camera-or even your own eyes-there's a MegaTen demon on the street! I'd love to make a game like that. "I heard there's a huge demon named Beelzebub at an intersection in Shibuya! Let's go beat it!" "If we can get a hundred people together, we can summon Metatron! We'll meet tomorrow in front of Tokyo Big Sight!" Doesn't that sound exciting?