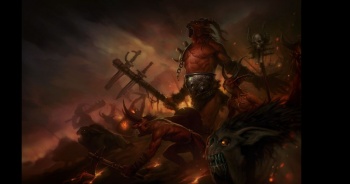 TE: You mentioned earlier that a lot of the art design is influenced by how it works in the gameplay perspective. Like you have to have a really recognizable silhouette. "I can tell that this is character X, doing Y." There's a perception that modern games are just brown and gritty with huge guys in huge power armor and it's starting to look the same. Do you think that's something other studios could stand to do more of, to have something more vibrant?

Christian: I can't really speak for other companies, but I will tell you that I think, for us at least, what ends up happening is that there's a few levels to this. For example, we design our skill systems with the class in mind. "Use these colors for these given skills, but don't use these ones." For example, you're playing co-op or PvP, and you see some spell being cast from the side of the screen or some skills being used, you can tell right away - oh, maybe that's a wizard, oh that's a monk versus the Demon Hunter.

So those are things that don't bother you while playing, but definitely factor into it being fun. We also try to de-emphasize the background a little bit and push the foreground a bit more. There's more contrast, more color in the foreground than there is in the background. And this is so the gameplay really is front and center, you can really see what's happening. In that regard, we're maybe not so different - I'm not so sure - but I do know that we really, really emphasize that very strongly. It's one of the key ingredients that makes for a very successful Blizzard game.

Jason: When we look at the classes, we think, "What's cool about being a barbarian?" If there are other barbarians out there in other games that are big and beefy, that's not going to stop up from making a big, beefy barbarian. That's what we think is cool. We do what excites us and then we try to make sure that it's clear, it reads well, and that you're making meaningful choices.

There are a lot of things that are just inherently fun. If you think you can make a choice as a player and you're rewarded for making a good one, that's a great fundamental rule. If you're put into a situation where the choices are not clear and you're frustrated, well, that's not great. We have first principles we start from, but we're really all about executing on the fantasy of that one thing. What's the best barbarian, what's the best wizard we can make? Because that's what's fun to us.

Christian: There's sort of a riff off that, too. We also want to create contrast in a lot of ways. For instance, if you go through a brighter environment, we'll follow it up with a dark one. So we feel like you can't get the full experience of something unless you're contrasting it against different things. Same rule applies for the monk vs. the Demon Hunter. Same rule applies for the environment. Again, we just feel that it makes for a better game and a more fun game. It's a game that we'd like to play.