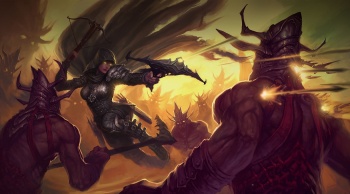 TE: I was speaking with Alex Mayberry, one of the producers, a few days ago. He said that you guys were coming up on having the first pass on the game pretty much done. Are you guys getting antsy because this game's been in development for so long now? Are you guys getting like "We want to get this out, we want to have people playing it, we want everyone to just have fun"?

Christian: We definitely want to make sure that the game is where it's supposed to be, where it's fun and awesome. So we're very happy with it. I think at the end of the day, however long it takes, we're willing to do that. I think that a lot of Blizzard games are played for a very long time. No one wants to ship a game that we're not happy with. A lot of the time spent on it is really what you're seeing with this - we're making sure that things play the way we want them to be. Until it's ready and we're really happy with it, we won't release it.

Jason: We do our best to crank through this stuff. We want to finish the game, we do. And we want people to play it, which is one of the reasons why we like to watch people play it on the show floor so we can give them a chance to really enjoy it. But it has to be done. You don't want it when it's not done. We hold ourselves to high standards because we're playing this game too. Everyday we're playing this game and I see stuff and say "Man, that's just not good enough. Let's fix it." And then we do, but it takes time.

TE: One more quick question. Are you guys tired of the rainbow jokes yet?

Christian: We're stoking the fire ourselves in some ways! No, not at all. I think we're in good humor with things like that. We don't take ourselves too seriously. I think that stuff is just awesome.

TE: I did notice at the end of the demo there - double rainbow!

Christian: What does it mean?

Jason: Even Mike [Morhaime] has a great sense of humor about that.

Christian: Again, we feel like we're part of the same community as our players and as a result, we take these things and we run with them and have fun with it.

Back in the mists of time, Blizzard said that it was attempting to commit to one high-profile release every year. With StarCraft II: Wings of Liberty and WoW: Cataclysm both launching this year, do we have a shot at seeing Diablo III in 2011? One can only hope - but with Blizzard, who knows?

John Funk wishes the Monk could summon zombie bears, too.