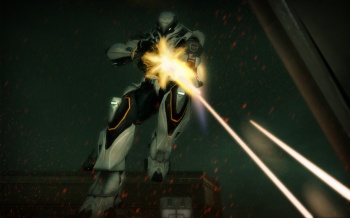 I had a lot of fun with a little downloadable shooter from TimeGate Studios called Section 8: Prejudice, but the one thing that struck me was that it wasn't a "little" game at all. For only a $15 download on Xbox Live Arcade, I was treated to a full single-player campaign and a robust multiplayer experience that rivaled the amount of content found in most full-priced shooters.Combine all that value with fresh gameplay - check out my full review of Prejudice if you're interested - and I wondered why more studios don't attempt the digital distribution model.

After deciding to get at the core of why TimeGate went in that direction for Prejudice, I rattled off a few questions to Design Director Brett Norton. I found out that self-publishing at a lower price point wasn't always the plan, but the gamble has certainly paid off for Time Gate as Norton reported a lot more people were playing Prejudice than its full-priced predecessor.

Norton also told me that most multiplayer shooters miss the casual target, how PR for a game like Prejudice can feel like trial and error, and what the game development scene is like near Houston, TX, a town more known for rockets and BBQ than Xbox controllers. Read on for the full interview with Brett Norton, Design Director of Section 8: Prejudice.

The Escapist Magazine: Other than the Kohan series, TimeGate cut its teeth working on other people's IPs like Axis & Allies and FEAR. What was it like going back to creating your own world in Section 8?

Brett Norton: It's a different set of challenges, but one that we enjoy. When you're creating your own universe, you have to create a lot of rules, backstory, and general framing setup. It's a really fun process, but at the same time, it adds significantly to the development timeline. You wind up having to figure out the very basics of how things work, instead of just being able to make a lot of easy, safe assumptions and moving on to the higher-priority goals.

On the opposite end, when you inherit a good setting to work with, you often just focus on building the game / gameplay much sooner. However, you have constraints, and you can't solve all your problems necessarily in the best way. Sometimes a solution just stares you in the face, but because of a universe or license constraint, you just can't make it happen.