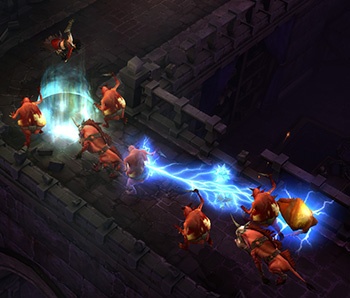 Last week Blizzard invited the gaming press to spend some hands on time with the forthcoming Diablo III beta. And while the game had our attention, Blizzard dropped something of a bombshell: Diablo III's auction house, it said, will allow for transactions using real money. That means that you'll be able to buy gold, items and components using cash from your bank account and sell that same stuff for credit with Blizzard or cash.

Since it's a bold move and one almost surely to be controversial, Rob Pardo, Executive Vice President of Game Design at Blizzard, took the time to explain how the new auction house would work. But first he told us why Blizzard was getting into the real money transaction biz.

If you want details on all the specifics, be sure to check out the official Blizzard FAQ.

"Ultimately players want it," Pardo says. "If Blizzard doesn't do this system, I'm not so naïve to think that it's not going to happen." Anybody who played Diablo or Diablo II remembers how sketchy it was just to trade items. And that's before you took all the shady third-party item sellers into account.

"In the past we're really taken this hard-line stance," Pardo continues. "We will just try to stamp it out in every place that we can." And all Blizzard's efforts have only gotten it so far. Play World of Warcraft today and you're still likely to get a private message offering cheap gold every now and then.

"It's really unfortunate the lengths we have to go on the WoW stuff," Pardo admits. "Definitely one of the biggest problems with WoW is the account compromises that happen from all those situations."

So rather than engage gold sellers on a second battlefield Blizzard is doing the progressive thing -legalizing it. "The hope is with Diablo III that because of the way we're doing the design on this stuff a lot of that really negative black market stuff maybe goes away," Pardo says. "But we'll probably have new stuff that we haven't contemplated before."

Blizzard is going to great lengths to make ensure that item trading in Diablo III is secure and pain free. "Historically it has kind of sucked to trade in Diablo," Pardo explains. "For us this is all about facilitating player trading...not about us selling items directly to the player." Still, Pardo suggests micro-transactions aren't entirely off the table. "At this point we have no plans of selling items to the player that would be player power items," Pardo says, "I could foresee us doing cosmetic stuff." For now the Diablo III auction house is going to about players selling to other players.

Here's how it works: Through the action house you'll be able to buy and sell gold, items and crafting components. Stuff you buy will go directly to your stash - a bank shared across all your characters. There will be a cash auction house and one that operates solely with gold. If you're playing the game on the hardcore setting, where death is permanent, you can only use the gold auction house.

There's a nominal fee to put an item for sale. "The reason we're doing a listing fee is primarily so that the real-money auction house has a certain quality of items," Pardo says. And there's a percentage fee when you take cash for a sale. That's because an as of yet unnamed third-party payment provider will be handling the details of transferring your cash to your bank account.

It's also possible to keep all the funds you earn selling items in your Blizzard e-balance. You can use that credit to buy more items, purchase games or merchandise from the Blizzard store or add subscription time to your World of Warcraft account. What you can't do is cash out your Blizzard e-balance. Once your funds are in there you can only spend them on virtual items or Blizzard products.

Pardo says it took a lot of legal wrangling and examination of global commerce laws to make this auction house happen. "What we've found," Pardo admits, "is that no one has actually done this before," which makes it hard to predict what will happen. There will probably be a few players who revolt and refuse to participate in the auction house. But Pardo thinks that more will find the meta-game of buying and selling virtual items to be fun in and of itself.

"It's a great gameplay system," Pardo says. "It's something where the players get to really benefit as much, if not more than Blizzard." But Pardo isn't afraid to admit that Blizzard also stands to make a nickel or two in this endeavor. "I do think it suddenly blazes a new business model," Pardo says. "I think it's potentially a more healthy one - you're sharing with the player base."