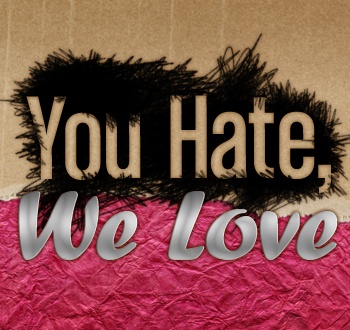 We're turning that frown upside down by telling you why you should really love those things you hate.

This week, we've been examining those aspects of the gaming world that really set your teeth on edge, but we'd like to end on a more upbeat note by pointing out the upside of some controversial issues. Sometimes it's hard to see the silver lining in all of those stormclouds, but we're doing our best to give you another way of looking at those things that so badly get on your nerves. Whether we win you over or not, we hope to at least give you a brief respite of positivity - or in some cases a chuckle - before you return once more to the seething pool of hatred that is the internet.

I'm still not entirely sure why I even need to say this, but Digital Restriction ... ahem ... Digital Rights Management is an unqualified benefit to this industry. Anyone who opposes that view is a dirty software pirate who only wants to steal the ivory door knockers off the servant quarters of John Riccitiello's guest yacht. You know who you are and, luckily for the health of the industry, DRM is on to you.

Thanks to technologies like DRM, it is now virtually impossible for software criminals to crack a game, which means zero dollars are lost to piracy. This increases consumer value by ensuring that struggling mom-and-pop publishers like EA and Ubisoft are able to earn enough money to keep the lights on. The benefits of these considerable savings are more than enough to offset the costs of adding in DRM technology, which, thanks to its seamless performance and thoughtful implementation (not to mention the forbearance of good-hearted gamers), amounts to roughly zero dollars per year. The people who do call in to support lines or post on forums with DRM problems are obviously crooks who are just looking to exploit the system, so most companies have wisely ignored those so-called "complaints," making DRM even more profitable.

The mild disrespect shown by assuming every legitimate user is a criminal and then asking them to prove they're not is far outweighed by the potential for catching the insignificant number of hackers who aren't smart enough to find cracked versions of the software that the respectable gamers are buying. If you're offended by that, you must be a criminal.

Moving past the legal and financial issues, DRM also serves as a handy benchmark of quality; if a game isn't good enough to protect with DRM, after all, why should I even bother to play it? It's why iTunes is so successful. Who wants to pay ten cents to buy unprotected MP3s off of a Russian website when he or she could spend ten times as much and have fewer player options when buying better versions of exactly the same songs off of iTunes? It's just the cost of virtue.

PAX East 2010: Why Journalists and Developers Hate Each Other Tom Goldman 21 Comments