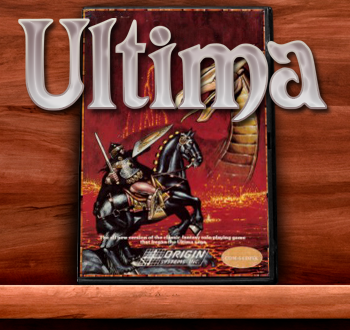 Many early programmers were also tabletop role-playing grognards. The first attempts at reproducing Dungeons & Dragons on a computer were probably the MUDs of the mid-seventies, but it wasn't until Richard Garriott wrote Ultima that a commercially available game added mechanics like hit points, attribute statistics and race choices. Different from adventure games of the time, the player-controlled character in Ultima could be whatever the player wanted. An elf wizard, a human fighter or a Bobbit (Hobbit) thief were all possibilities.

The game also featured many of the conventions that we now take for granted in RPGs. The game world was separated into a wilderness map, which was peppered with towns and dungeons. Enemies and monsters were randomly generated. Spells and magic, as well as better arms and armor, were bought in towns using the gold found adventuring. Quests involved going to specific dungeons and killing a specific creature. While Ultima wasn't a true presentation of the tabletop experience, it proved that a fun computer game could be derived from the Dungeons & Dragons ruleset. In the 80s, Ultima meant RPG and Garriott's series laid the groundwork for the "Gold Box" D&D games like Pool of Radiance, BioWare's Baldur's Gate and even Dragon Age as well as the entire MMO market.