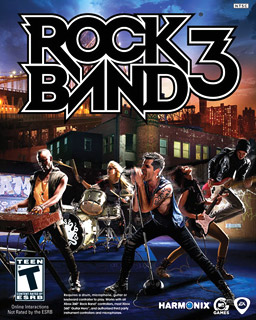 The stars aligned for this third installment of Harmonix's celebrated music game series. After years of quick cash-ins creating a thoroughly oversaturated market, Rock Band 3 takes a giant leap into the future of music games and sets an amazingly high bar for its competitors.

Even real musicians who usually scoff at these types of games found themselves captivated by the more realistic Pro Mode, which removes many of the abstractions and compromises required when treating a game controller like a real analog instrument. The new one-button-per-string-per-fret guitar controllers, keyboards and pro drums with cymbal packs, make it feel like you're actually playing the real instruments instead of just tapping away on an oversized, oddly-shaped game controller.

On top of that, the new career mode opens up a wide range of progressive achievements and unlocks, with visual customization options that would shame most top-tier roleplaying games. Making your own band and then taking them from garage band to world stars is an epic story, with enough smaller rewards along the way to keep you motivated. Additionally, a training mode helps you learn parts and work towards mastery of each of the game's featured instruments.

All of those features wouldn't count for much if the music itself wasn't great. Thankfully, Rock Band 3 has a strong, diverse track list. Sure, it's not as big on "rock" as the title implies, but there's something here for everyone.

This is, quite simply, the pinnacle of music games and it'll be hard for Harmonix to top itself.

Click here to read our thoughts on Rock Band 3 as part of our music games roundup.