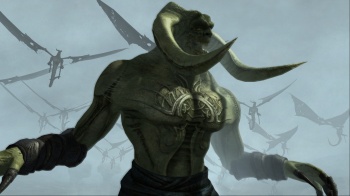 I will say this: after hearing the presentation for the sequel, I downloaded the first game and was immediately drawn into this RPG-RTS hybrid. You control different Knights of the Round Table under King Arthur and move them around a strategic map of fantasy England, engaging in adventures and recruiting soldiers. When you enter a town or castle, the game switches to an RTS in the vein of Empire: Total War with units of archers, footmen and cavalry position themselves on a real-feeling battlefield full of victory point locations and plenty of forests to hide in. According to Orsolya Toth from Neocore Games in Hungary, the sequel, King Arthur II, solves many of the problems in the first game, while advancing the story into a darker place than you might remember from Arthurian legend.

After the first game, King Arthur has united the land under his banner, but at the start of King Arthur II, a witch queen named Morgouse (not to be confused with Morgana the Fey who is an ally in this retelling) has gravely wounded the King. Because Arthur is mystically connected to the land, a festering wound opens up and dark monsters begin pouring out which your knights must then defeat.

The presentation I saw was short on assets - I was shown a few nice-looking screenshots - but Toth said that the sequel will be a better designed game on multiple levels. The magic system is revamped with casting time allowing you to respond to an enemy decimating your troops with one spell, and many more voiceovers will be recorded so that you don't hear the same sound effect every time you select, "Archers!" With the recent release of the Druids expansion for King Arthur, the title is quickly becoming one of Paradox's most loved franchises and the sequel aims to keep the (dark) fantasy alive.

A funny little action adventure game with a really innovative magic system where you can layer up to 8 elements on top of one another for devastating effects. Check out my full preview of Magicka here. 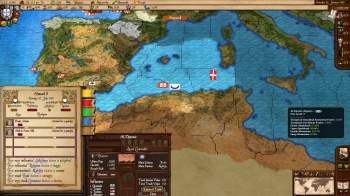 One of the criticisms of Paradox's Europa Universalis 3 grand strategy game was that the nation you chose to represent was little different from any other, giving the player a pretty uniform experience no matter if you were France, Portugal or Russia. The mod Magna Mundi attempted to provide a diverse play experience based on what country you were playing, and Paradox was so impressed with the scope and breadth of what the mod team accomplished that it decided to publish Magna Mundi as a standalone modified version of EU3. The team of about 22 people working on Magna Mundi part-time as a labor of love is led by Carlos Gustavo, a Portuguese gamer who travelled to New York to introduce me to the game.

"With Magna Mundi, the idea is to put your country in the best situation it can be, given its history. [The goal] is not to paint the world in one color," Gustavo said, which is in contrast to many strategy games. You can choose to play one of 400 different nations, countries and tribes from all over the world, some of which start out more powerful than others obviously. Depending on where you start, there are different challenges and governments to interact with such as European nations manipulating the Holy Roman Empire, while Asian nations must pay tribute to China, or risk open war with the most powerful nation in the region.

Historical verisimilitude is important in Magna Mundi, and even though the game is effectively a huge sandbox in which you can dipliomacize, go to war, or any mixture in between, the "story of history" is told through real "random" events that impact how you play.

Perhaps the most interesting thing is that Magna Mundi is using a robust scripting system which will allow people to further tweak and modify their game experience how they see fit so that the cycle of mods refining a game continues. My only question is: Who mods the modders?