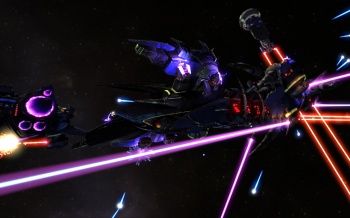 Sword of the Stars II: The Lords of Winter
Release Date: Q3 2011

The sequel to Kerberos Productions "4X in space" game is deeply vested in story. It's an oddity for a small production team like the company has in Vancouver, BC to even have a dedicated lead writer on staff, but Arinn Dembo has crafted an intricate story for a game that doesn't even have a single player campaign. The story of Sword of the Stars II is told organically through in-game events and the ever-evolving SOTSapedia, a sort of in-game wikipedia. This feature will be populated with the vast backstory for each race you encounter, but it will also allow you to make annotations on pages and then share that with your friends in the game.

The subtitle for SOTS2 denotes the return of the Lords of Winter, an evil race of enormous creatures that don't inhabit planets but instead the actual space between them. For purposes of scale, lead designer and COO of Kerberos, Chris Stewart, held up a piece of artwork depicting a huge tentacle-laden being in space, and the human Cruiser class starship (measuring about 150 meters) was a mere thumbnail-sized speck beside it.

While you'll most certainly encounter Lord of Winter in SOTS2, the game still largely revolves around exploring and colonizing planets, encountering science-fiction races like the telepathic Liir and the avian Morrigi, while researching technology and designing better ships in modular interface that reminds me of Alpha Centauri. The turn-based strategic star map yields to real-time space battles whenever you encounter something but if the combat isn't resolved in 4 minutes, then the turn advances and the combatants can re-engage or try to evade.

All of those features, including hotseat multiplayer, will be preserved in SOTS2, but I hope that Kerberos overhauls the somewhat cartoonish art style of the first game. If what I've seen is any indication, it does in fact look like the sequel will be an interesting alternative for Sins of a Solar Empire or Galactic Empire fans.

So there you have it, all the games of Paradox Interactive's lineup for 2011 and beyond. It seems that the company is branching out into different territory than the classic grand strategy games that has been its bread and butter. And I for one am excited for what the future holds for strategy games and PC games in general.