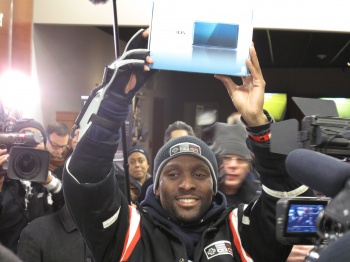 Does the average consumer know what the Nintendo 3DS is?

That was the question on my mind as I left Saturday's midnight launch event held at New York City's Union Square Best Buy. A half a block's worth of fans had gathered in the hours before launch, stretching down the side of 4th Ave. from 14th St. towards 13th St.

Most launch lines go much further or wrap around the block and Nintendo obviously had expected as much. Turning west on 13th St., a series of pretzel stands, demo booths, steel gates and an Entrance sign had been placed, but left unused. Before midnight struck, event workers had already begun to disassemble the booths.

The people in attendance made up for their small numbers with enthusiasm. Most of them, discussing classic SNES games, wearing Nintendo-themed clothing or fiddling with the now "retro" Nintendo DS, could be called Nintendo's core fan base. They were the people who would know about a new Nintendo system without a single commercial or magazine ad.

Many of them said they'd already seen the new 3D screen. Some claimed that mere seconds with the device had convinced them the purchase was mandatory. Here they were, enduring the harsh elements of a long New York winter to be the first to own the new device. For them, this was the future. One man, who said he wanted to work in the videogame industry one day, shouted to his friends that they were participating in history.

At 11:10 pm, the President of Nintendo of America, Reggie Fils-Aime, stepped onto a small outdoor stage, his wide smile partly concealed by a glass teleprompter.
Out with the old, in with the new was the gist of Reggie's pitch, that echoed over the chattering of teeth from the crowd crammed closest to the platform.

The Big N innovates, and would continue to do so with the 3DS, Reggie explained, mentioning the May downloadable update that will add a number of features to the system. This is a continuation of that strategy, he explained.

Reggie's exit, like his entrance, was met with applause and a couple of hollers and he was kind enough to slouch over and pose for iPhone-snapped photos with fans.

As the clock ticked closer to midnight, Nintendo representatives and publicists plied the line with free pretzels, water and t-shirts. Staff distributed 3D glasses to the patient people on line to toss in the air like graduation caps. It was like their old DS was K-12 and they were moving on to college. Everyone hurled the specs in the air and cheered. They'd made it to the 3DS!

Confetti fired over the fans, then the media filed into the Best Buy and up its escalator, shortly followed by Reggie, his entourage, and the first person to purchase the Nintendo 3DS: Isaiah "Triforce" Johnson.

Having bought the first Wii, Triforce is something of an established Nintendo fan. The Powerglove consistently worn on his right hand has become something of his superhero symbol. Reggie seemed to recognize him, and they shared a brief quiet moment before media handlers corralled press around the two.

The line was unusually small, particularly compared to Microsoft's much-hyped Times Square launch that wrapped down and around long Midtown blocks. Passersby who asked what about the hubbub, for the most part, hadn't heard of the 3dS. Others seemed indifferent or confused.

People who know about the 3DS - fans and the family and friends of fans - seem genuinely impressed by the machine. But judging from the launch, casual consumers aren't clicking with the company's marketing message. It's unclear, it appears, and there isn't enough of it. That didn't stop the loyal Nintendo fans, however, from braving the cold on a weekend night.