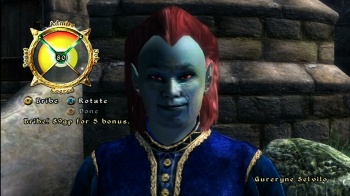 There are plenty of big things that will get tweaked one way or the other as the Elder Scrolls franchise moves from Oblivion to Skyrim, but this is not about any of those. This is about the tiny things that bugged me as I played through 300-some odd hours of Oblivion; the small, broken pieces that kept nagging at me while I was prancing around Cyrodiil. It's entirely possible that not a single thing on this list ever crossed your mind as you played, because they're not game-breakers. They're, at most, game-denters. Maybe not even that, maybe just game-bumper-into-ers. Yeah, that's a technical term.

So here are five small annoyances that I really, really hope get doctored for Skyrim.

I appreciate the idea that went behind Oblivion's Persuasion Wheel minigame; rather than just selecting your response from a drop down menu, you engage with the person by figuring out what particular kind of buttering up they'd enjoy. In theory, it's a fine idea, but in practice, it's tedious and repetitious. Everyone expresses their dismay or appreciation just about the exact same way, and once you figure out how to game the game, it all just becomes mechanical. It also doesn't leave much room for role playing. It doesn't make sense for every kind of character to be good at joking or coercing, but your stat only affects whether or not you can even start the minigame with someone, not how effective your boasts are.

2. Let Me Rearrange My House

You could buy a house in every single town in Oblivion, and the game's downloadable content gave you access to several more. You could also buy several different sets of furniture for each location, everything from wall tapestries and candles to beds and storage chests. The houses served the practical purpose of giving you a place to rest - and heal up - no matter where you were, but it also helped create a sense of immersion and belonging. I bought each and every domicile I could and tricked them all out to their fullest extent, but while I had many houses, only one was my home: the one in Cheydinhal. There was something about the colors and architecture of that city that really appealed to me and gave me a sense of peace that romping around Bruma just never provided. I was happy to turn over hard-earned gold in exchange for the knicks and knacks that would fill the space, but was disappointed when I discovered that it was about as interactive as wallpaper. I couldn't put my trinkets in the display case, I couldn't move the dining room table closer to the window - not that it really mattered, as I couldn't sit down at it anyway. Not every hero wants to spend their off-hours redecorating their house, but it would be great if those of us who wanted to indulge our inner Martha Stewarts could. (Not the going to prison part, the homemaker part.)