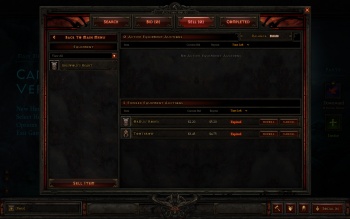 Blizzard recently invited The Escapist down to its Irvine, CA studio to get some hands on time with the upcoming Diablo III. While there, we also learned about Blizzard's plans to launch a cash-based auction house for the game. You can read Gus Mustrapa's interview with Rob Pardo to get most of the details. But since you're likely to have lots of questions about some of the service's finer points, here's a comprehensive FAQ straight from Blizzard.

Q: What is the Diablo III auction house system?
A:
Acquiring epic new gear for your characters has always been a big part of the Diablo experience. Because of this, players have found a number of different ways to trade and otherwise obtain items both within and outside of the game. Many of these methods were inconvenient and either tedious (for example, repeatedly advertising for a desired trade in Battle.net chat channels and waiting for responses) or unsafe (e.g., giving credit card information to third-party trading sites). With Diablo III, we're introducing a powerful auction house system that will provide a safe, fun, and easy-to-use way for players to buy and sell the loot they find in the game, such as weapons, armor, and runestones. Two different versions of the auction house will be available in Diablo III: one based on in-game gold, which players acquire through their adventures, and one based on real-world currency.

Q: How is the transaction fee determined?
A: A nominal fixed transaction fee will be deducted from the seller for each item listed in the auction house. This fee consists of a fixed charge to list the item, which is assessed whether or not the item is successfully sold, and an additional fixed charge that is assessed only if the item is sold. Because the listing portion of the fee is charged even if the item doesn't sell, it will be in the seller's interest to list items he or she believes other players will be interested in, and to do so at a competitive price. Specific details related to the transaction fee for the currency-based auction house will vary by region and will be announced at a later date.

Please note that we plan to waive the listing portion of the fee for a limited number of transactions per account. In other words, for these transactions, the seller will only pay a transaction fee if the item is successfully sold, and that fee will not include the listing charge. We'll have further details on this as well at a later date.

Q: Why are you creating a currency-based version of the auction house?
A: Our goal with all of our games is to ensure players have a highly enjoyable, rewarding, and secure experience. Acquiring items has always been an important part of the Diablo series, but the previous games have not had a robust, centralized system for facilitating trades, and as a result players have turned to inconvenient and potentially unsafe alternatives, such as third-party real-money-trading organizations. Many of the transactions between players and these organizations led to a poor player experience and countless customer-service issues involving scams and item/account theft, to name a few. To that end, we wanted to create a convenient, powerful, and fully integrated tool to meet the demand of players who wished to purchase or sell items for real-world currency, and who would likely have turned to a less-secure third-party service for this convenience.