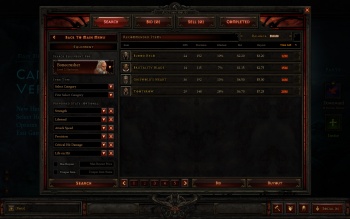 Q: Why would I want to pay real money to buy or sell in-game items?
A: Acquiring items has always been a core part of the Diablo series' appeal. With the previous Diablo games, many players have shown a great interest in buying, selling, or exchanging items for their characters using real-world currency, turning to potentially unsafe avenues to accomplish this goal. The currency-based version of the auction house provides players with an easy-to-use, Blizzard-sanctioned way to collect money for items obtained while playing Diablo III. In addition, it helps protect players from scams and disreputable third-party sites by providing a secure, in-game method to search for and purchase items posted by other players that are a perfect fit for their character and play style.

The currency-based auction house is completely optional. Players who aren't interested in paying real money for items will still be able to rely on items they acquire through their own adventures, and they'll also be able to trade with friends and use the full-featured gold-based auction house.

Q: Does the currency-based auction house signify a shift in Blizzard's business and revenue model?
A: We've always tailored our business models to match what we've felt would be most appropriate and effective for each game and in each region, and that's the case with Diablo III as well. The item-based nature of Diablo gameplay has always lent itself to an active trade-based ecosystem, and a significant part of this trade has been conducted through unsecure third-party organizations. This has led to numerous customer-service and game-experience issues that we've needed to account for. Our primary goal with the Diablo III auction house system is for it to serve as the foundation for a player-driven economy that's safe, fun, and accessible for everyone.

Q: What's Blizzard's cut?
A: As with other online auction sites and real-world auction houses, our fee structure will vary by region. However, we plan to collect a nominal fixed transaction fee for each item listed in the auction house. This fee consists of a fixed charge to list the item, which is assessed whether or not the item is successfully sold, and an additional fixed charge that is assessed only if the item is sold. The listing portion of the fee, which helps encourage sensible listing prices and discourage the mass posting of items that are very low quality or would be of little interest to other players, will be waived for a limited number of transactions per account. For players who opt to have the proceeds of their auction house sales go to their third-party payment service account instead of to their Battle.net account, Blizzard will collect a separate "cash-out" fee. Specific details regarding these fees will be announced at a later date.

Q: Why would I even want to use the gold-based auction house?
A: We recognize that not all players would prefer or have the means to participate in the currency-based auction house, and it was important to us to provide these players with a full-featured alternative.

Q: If I no longer need an item I bought in the auction house, can I relist it in the auction house?
A: Yes. Once you've purchased an item you can do anything with it that you could if you had acquired it through your own adventures, whether that be using it yourself, or, after a cool-down period, trading it to another character or relisting it on either the gold-based or currency-based auction house. In fact, you can generally do any combination of these things -- for example, you can purchase an item in the auction house, use it for a while, and then relist it or trade it to another character. Aside from certain quest items, there will be very few (if any) items that will be "soulbound" to your character and therefore untradable. Please note that the duration of the cool-down period mentioned above will be discussed at a later date.