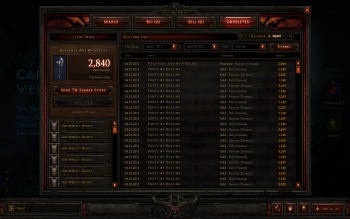 Q: What items can be traded in Diablo III?
A:
Nearly everything that drops on the ground, including gold, can be traded with other players directly or through the auction house system. Aside from certain quest items, there will be very few (if any) items that will be "soulbound" to your character and therefore untradable. We are also planning to allow players to buy and sell characters in the auction house at some point in the future and will have more details to share on that at a later date.

Q: What is "smart searching"?
A: When players launch the auction house interface, they'll be able to select any Diablo III character associated with their Battle.net account. The "smart search" feature will assess which item slots have available upgrades and will sort items available in the auction house based on which upgrades would be most beneficial to the character. You can also search for specific stats to match the requirements of a particular character build.

Q: How does bidding work?
A: Players will be able to place a current bid as well as a maximum bid if they wish to engage in automatic bidding. In addition, they'll be able to check the status of their bids on the "Currently Winning" page and the "Outbid" page in the auction house interface.

Q: Can I buyout items that I want to purchase immediately?
A: Yes, the Diablo III auction houses will support a buyout feature as well as standard bids.

Q: How do I pay for items?
A: For the gold-based auction house, purchases will be made using in-game gold. For the currency-based auction house, players can make purchases using a registered form of payment attached to their Battle.net account. As with other popular online-purchase services, players will also have the option to charge up their Battle.net account with a balance of funds that can be drawn from for purchasing items in the currency-based auction house. Note that this process might be different for certain regions; we'll provide further region-specific details as we get closer to launch.

Q: How do I receive the items I've won?
A: After winning an auction, the item will be available to pick up through the built-in auction house interface in the Diablo III client. Players will then be able to immediately send that item to their shared stash (storage shared among all the characters on a Battle.net account) or repost the item in the auction house after a cool-down period. The duration of the cool-down period will be discussed at a later date.

Q: How do I sell items?
A: From the auction house interface, players will be able to select items from their shared stash or from a specific character's inventory. They will then be able to post items for sale by listing a starting bid and buyout price.

Q: Will buying or selling items in the auction house reveal my identity?
A: No. All player transactions in the gold-based and currency-based auction houses will be anonymous, and neither your real name nor your character name will be revealed to other players.

Q: Will there be a mobile or Web-based auction house?
A: We're always on the lookout for opportunities to enhance the game experience and keep our community connected to our games through the Web or mobile devices. However, we do not have any plans to share along those lines at this time.

Q: When will this be available for testing?
A: We'll share more information on our auction house testing plans as we get closer to launch.