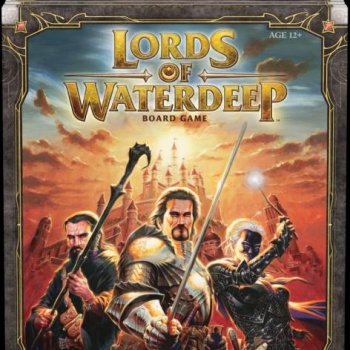 Settlers of Catan, Carcassonne and Ticket to Ride are examples of European-style board games which have grown massively in popularity over the last ten years. They feature playtime usually around an hour, family-friendly content, and indirect competition between players. I knew Wizards had enjoyed success adapting the D&D rules to the board game format but this new game was a different beast. Lords of Waterdeep (LoW) mashes up the Euro-style of board games with a D&D aesthetic and the combination works beautifully - at least enough to get my wife interested in playing it more than once.

You see, my wife blanches at anything with a sword or a staff on the cover. Her distaste for fantasy and roleplaying is my Ring to bear, but I'm most frustrated by it getting in the way of her enjoyment of games. LoW has both a sword, staff and freak with pointy ears - her words, not mine - on the box so I had to cajole her to even sit down at the table. When a friend spent the first ten minutes reading the rules booklet, my wife had rolled her eyes, sighed, and jokingly complained about marrying a "dork" about 17 times. The initial complexity of the rules didn't help. "This makes no sense," my wife said. "There's a lot going on, right? I don't understand half of those rules. What?" She was ready to scrap the whole thing and whip out our weathered copy of Settlers.

But then - and this is a testament to the design of Rodney Thompson and Peter Lee - something strange happened:

"Oh," said my wife after we started setting up the board. "I get it."

And that was it. The game just clicked for her. We spent the better part of an hour having a great time sending adventurers on quests, constructing buildings and scoring victory points on our way to becoming Lords of Waterdeep.

At the start of the game, each player is dealt a secret Lord card that gives you a general strategy to follow. There are 8 rounds in the game, at the end of which you total up all your points to determine the winner. In each round, the players take turns placing their agents on buildings around the city of Waterdeep - the agents are nicely carved wooden people - and each building will give you certain resources like gold or adventurers. Quests are the main thing you do in LoW to earn victory points, and you complete them by spending two fighters, a wizards and a cleric, for instance. Some quests also need gold to complete, while others reward you with gold; the game is all about having the right resources at the right time. There's also intrigue cards, which you can only use when you place an agent on Waterdeep harbor, and you can build new locations to send agents to with neat mechanics. At the end of each round, players clear their agents, and the next round starts again by taking turns placing them throughout the city. The game ends after eight rounds.

There's very little direct competition between the players. You can't attack another player or steal their stuff. The competition comes from the scarcity of resources, which can lead to a very political game. You can only recruit wizards - the wooden purple cubes - at Blackstaff Tower, but if a player already has an agent occupying it this round, well, you're out of luck. Turn order is so important, there's even a location that rewards you with going first.

At first glance, LoW looks like it's going to be about adventure and intrigue. The Forgotten Realms city of Waterdeep on the game board is steeped in the history of Faerun as written by fantasists like R.A. Salvatore and Ed Greenwood. But the setting is little more than set dressing. You recruit clerics and rogues from locations you might find familiar from reading Forgotten Realms books, but they could have been called steampunk engineers, mad scientists or axe cops for all they have to do with the game. Some purists might be disappointed the game mechanics don't have anything more in common with fantasy tropes, but you shouldn't go in thinking you are going to be roleplaying. You are playing a strategy board game, with all of the abstraction that usually entails.

LoW came out yesterday and it should be sold at your friendly local gaming store for around $50. To be honest, that price feels like a steal for how well-constructed the pieces are and the quality of the card stock. And if you are a sucker for organization like me, the box for LoW will feel like a gift from Torm with each piece, chit and figure nestling into a designated place.

I could add up all the facets that please me about this game - the elegant turn-based rules, the fantasy dressing, the artfully crafted components like the board and wooden pieces- but it wouldn't mean much to me personally. I appreciate the tight design, and that alone would fuel my desire to play it but that doesn't always mean I will get the chance. No, there's one specific fact that sold me on how great a game Lords of Waterdeep really is and it has nothing to do with the sum of its parts. There's one thing that means it will be a game I'll play more than others:

My wife likes it.

Critical Miss: Lord of Waterdeep The Wooster 26 Comments
Comments on