Halloween Horror Nights, now in its 22nd year at Universal Studios in Orlando, Florida, is a celebration of all things spooky and macabre. Other theme parks may embrace the safer side of the holiday to please a younger audience, but Universal makes no such compromises, stuffing its streets with everything they think might make you pee your pants in fright. I hadn't been able to attend HHN for about fifteen years, but this past weekend, I got the chance to roam the scary hot spot once more. I was eager to explore every terrifying nook and cranny, but one goal stood out more than the rest - I wasn't leaving that park until I saw Pyramid Head. 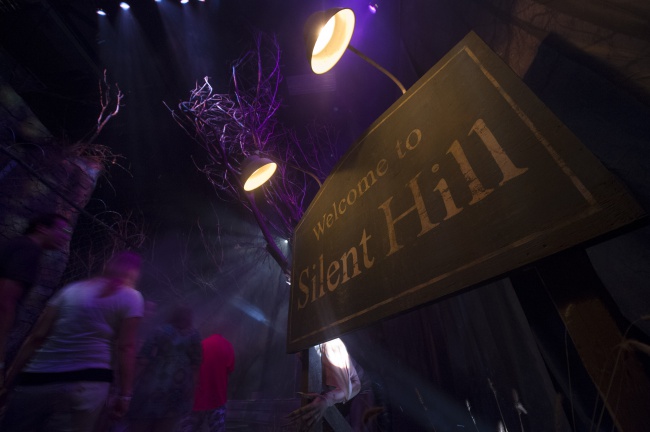 I'm a big fan of all things horror, which has the unfortunate side effect of making it increasingly hard to scare me as I see more and more scary stuff. I appreciate zombies and vampires and slashers and the like, but they lost their ability to actually frighten me a long time ago. Silent Hill 2's Pyramid Head, on the other hand, is still so strange and ominous that just looking at him makes me shiver. Lugging a sword so mammoth he has to drag it on the floor, Pyramid Head has come to embody the delicious helplessness that good horror should evoke. To see him is to know that death is near, and there is nothing you can do about it. I love him. He was somewhere in this park, impatiently waiting for me to find him so that he could scare the holy bejeesus out of me. I would not disappoint him.

I had some stops I needed to make first, though. "Welcome to Silent Hill" - combining elements from the first movie, its soon-to-be-released sequel, and the latest game in the franchise, Book of Memories - was just one of seven haunted houses at Halloween Horror Nights. Irreverent magicians Penn & Teller designed "Newkd Vegas," a Technicolor wonderland of mutant showgirls, Elvis impersonators, and an animatronic mannequin affectionately named Steve the Puking Guy. Yeah, he really does puke. A lot. He's considerate enough to do it into a bucket, at least. "Newkd Vegas" was a fun departure from the typical scare factory, using bright colors and 3d effects to heighten the sense that you were walking through the remnants of Sin City, but also showcasing a sense of humor about the whole thing. Sure, your skin might be melting off your face, but what mutates in Vegas stays in Vegas, right?

I wasn't sure what to expect from the haunted house based on The Walking Dead. As much as I adore the show and the game, a zombie is a zombie is a zombie, and Walkers aren't all that fast. The typical "boo" style scares that make haunted houses frightening wouldn't really work here, and I was worried that the entire experience would be a bit of a snooze. Yeah, not a problem. Going through the Walking Dead house felt like being dropped into Season One of the show, right down to the "Dead Inside" door that opened just enough to let some zombie fingers wiggle out and the bloody handcuffs left behind when Merle sawed off his hand to escape certain death on the rooftop. The girl in the pink bunny slippers shuffled along next to us, and shotgun blasts rang out from Dale's RV. It did such a good job of recreating the hopeless atmosphere of the survivors that I was genuinely relieved to find the exit and be back among the living. Best of all, there was nobody asking "Where's Carl?" every five minutes.

Though the haunted houses are the main attractions of Halloween Horror Nights, most of your actual scares will happen in the streets, where themed "scareactors" roam in packs. These people are seriously, seriously dedicated to freaking you right the hell out. The shtick behind them this year was that as construction team were working on the theme park, they unwittingly unearthed The Iniquitus, enormous skull-headed winged demons who in turn raised up their own groups of bloodthirsty minions. The glowing red eyes of The Iniquitus would glare at you through the foggy night as one of their dedicated followers would stealthily sidle up behind you. Each legion of horror had its own theme, like vampires, beasts, or chainsaw-wielding female prisoners, but two groups stood out as being particularly unnerving. The shirtless Warriors, covered in body paint and carrying glaives, were disturbingly nimble and stealthy. One scuttled up to me on all fours like a spider while another snuck behind to breathe on my neck - a wonderfully creepy moment in an evening full of scares. But even the Warriors can't compare with the Traditionals for sheer get-away-from-me goodness. They're just trick-or-treaters, but their dime-store plastic Halloween masks are just way too reminiscent of BioShock's Splicers for my mental well-being. Seriously, it was like walking through Rapture - I ran whenever one spotted me.