Richard Garriott is the kind of man game writers love to talk to. He's the embodiment of The Dream: a young man coding computer games in his bedroom, distributing them by hand in plastic baggies, who made it big, started his own company and became a legend in his own time. Called Lord British for a time (he's now General British), Garriott's flair for the dramatic has helped catapult his games (and his image) into the stratosphere of gaming.

Best known for his Ultima series of games, Garriott has recently reentered the MMOG space with Tabula Rasa, a sci-fi action MMOG set in a possible future after the devastation of the planet Earth by an alien race known as The Bane. Tabula Rasa features shooter-style combat, a refined user interface, fully solo play (a first for an MMOG), a save point system (another first) and a story as rich and deep as any recent single-player game. 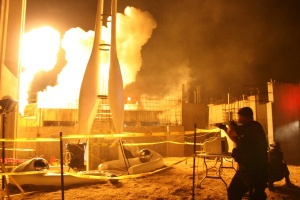 Wednesday night, publisher NCsoft drove about 100 journalists and guests to Richard Garriott's home in the Texas Hill Country. The event, called "The Logos Academy" after the magical language of symbols created by Garriott for Tabula Rasa, was scheduled to last six to seven hours. Only a fraction of that time was devoted to viewing the game. The rest was playtime.

Tucked away in the hills above Austin's Lake Travis, Garriott's Brittania Manor Mark 2 (Mark 1 was his original home in New Hampshire, Mark 3 is currently under construction) is the home of a man obsessed with games, puzzles, magic and play.

There's a waterslide attached to his pool, accessible via a wrought iron balcony that runs the length of the second story. If sliding isn't your thing, a section of the balcony opens like a gate, and you can jump right into the pool from the second floor (it's 10 feet deep at every point, for just this purpose). If neither diving nor sliding is your thing, you can float to the bottom of the pool and look out the side via a handy underwater window with a view of the "beautiful" Texas Hill Country.

If that doesn't tickle your fancy (or if it's raining) you can swim under the wall adjoining the house into the indoor section of the pool. Or perhaps you prefer hot tubbing. In which case, the hot tub is simply a step away, fed by a cascading waterfall as tall as the house. If you get too hot, sprinkler nozzles installed in the ceiling emit a showery spray of water (hot or cold). If any of the above happens to bore you, well, there's an extensive collection of medieval weaponry to play with ...

Next Page: "We'll Need Your Cell Phones Because of the Blasting Caps"