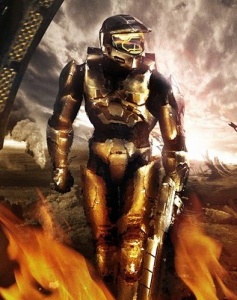 I've railed about the lunacy of the videogame pre-order boondoggle often enough to get my own satellite radio show about it (my door is always open, Sirius), but here we are again, another fall has brought us another wave of new releases, and I've been asked by my local game retail associate to drop some cash for the right to purchase (the "right" to purchase) a game that will undoubtedly be flooding every store imaginable in just over a week.

I've even heard that it's going to be sold at 7-11s in California - starting at midnight. At least at 7-11 the line in front of the store will be stocked with Slurpees and rotisserie hot dogs. I'll more than likely be standing in line at midnight in darkened mall wondering when the zombies will start appearing. (Which reminds me, I should probably let my boss know I won't be coming to work that day.)

The local gamerporium in question had a sale this weekend, giving extra-super-duper bonus credit for used games traded toward a Halo 3 pre-order. I just happened to have a few games lying around, so I took advantage of that, and yes, put the money toward Halo 3. The worst part? I already had money on Halo 3, and have had for at least two months.

I know better than this. I haven't pre-ordered any game - ever. Not even the much ballyhooed BioShock, which, if there was ever game worth pre-ordering, that was it. But Halo is a special case. Or is it?

I didn't even buy the original when it came out. I didn't own an Xbox at the time. About a week before Halo 2 came out I found myself in a game store and though about pre-ordering it and then rapidly came to my senses and bought Halo 1 instead. The day Halo 2 was released I was on a business trip and stopped in at the first retail store I saw (a Kmart) and picked it up from among the several hundred copies on a shelf.

Pre-ordering is the biggest scam going. It combines the seeming frugality of layaway with the luxury of exclusivity. You feel good about putting down just a few dollars on a game. It's like opening an IRA with an extremely short term. It's also alluring. There's a chance - not a large one - that the game might sell out. If that happens (and it never has) your pre-order slip is a ticket to salvation. You'll be walking home past that dreadful line of folks who'll be going home empty-handed, and, if you're like me, you'll get to write about the next day.

But again, this has never happened. Games don't sell out, and if one store runs low, another nearby is sure to have more in stock. It's true that pre-orders help game distributors gauge interest and thereby ensure adequate supply, but games, unlike game consoles, are cheap and easy to make. If, heaven forefend, any game should be so surprisingly popular that its first production run falls far short of demand, you can easily expect a re-supply within a week.

I know this. I also know that even though putting money away on a game I'll get to play in the future feels like saving, it's really not - it's lending. I'm lending EB/GameStop money so they can fluff their revenue report when it really matters. Like now, for example. IRAs and savings accounts generate interest, and when you cash it out it's theoretically supposed to be worth more than when you started it. A game is just a game. My Halo 3 pre-order isn't generating interest for anyone but EB/GameStop, and when I finally cash it out next week, it will have instantly depreciated by about 50 percent. This is what we call economics of the stupid.