With Halloween upon us, Team Humidor has been emptying our closets in search of movies, music and games to jump start the spirit of spookiness. Because toilet papering Cliffy B's house, soaping the windows of the police station and digging up graves are hard work, and a double shot of witch's brew will only take you so far on its own.

So to help us (and you) get in the mood, we've compiled the following list of spooktacular Halloween treats. Enjoy! 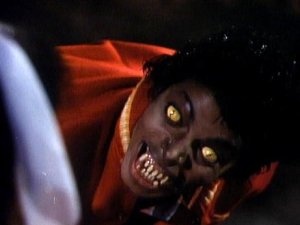 Before the day he became an odd-looking white female (which is pretty creepy in and of itself) Michael Jackson, The King of Pop, released an album, Thriller. And lo, it was given unto the masses, and we each stood and proclaimed that Billie Jean was, in fact, not our lover and that if one had a problem with such a notion, he should Beat It. Maybe it is Human Nature to desire such a PYT as she, but keep suggesting The Girl Is Mine if You Wanna Be Startin' Somethin'.

But the true jewel of this illustrious album is the title track, Thriller, with the monologue by Vincent Price. Just listening once will have you craving sweet pumpkin-y treats and dancing like a zombie. Just ask these guys. - Julianne Greer, EIC, The Escapist

One of my fondest videogame memories is from 1999 when as a teen I sat huddled in the darkness in front of my computer. Normally, I'm that guy who giggles at horror movies, but that night, as I crept through the zombie-filled caves with my friend Garrett, even the sound of the mouse as it crept across its pad set my teeth on edge. I was terrified.

Thief: The Dark Project and its sequels get plenty of critical accolades for its story, innovative sneaker gameplay and much more, but the real beauty of that game was how it really grabbed me and scared me in a way no film or game has since. As each zombie jumped out, I jumped too, literally tossing the mouse across the room. The zombie levels had me so scared that it wasn't until years later that I actually finished the game. - Dana Massey, Senior Editor, WarCry

Halloween means zombies, and when we're talking zombies, we're talking Dead Rising. Not only did this zombie shooter help dig the Xbox 360 out of its post-launch grave, it also resurrected the "beat the crap out of zombies invading a mall" genre. So right out of the gate we're talking about a great deal of zombilicious awesome.

And then you play it, and it's exactly what you expect: hours of mindless fun stomping, beating, shooting, blending, exploding and slicing zombies. In fact, there's even a bonus mode, minus story, where that's pretty much all you do. And you're in a mall, so, pretty much the sky's the limit in terms of what you have at hand for the zombie beating. You can even break into the clothing stores and play dress up. It is, in a a few words, the perfect Halloween game.

Inspired by Romero's Dawn of the Dead and brought to you by the Capcom, of Resident Evil fame, this is zombitastic gaming at its best. - Russ Pitts, Associate Editor, The Escapist