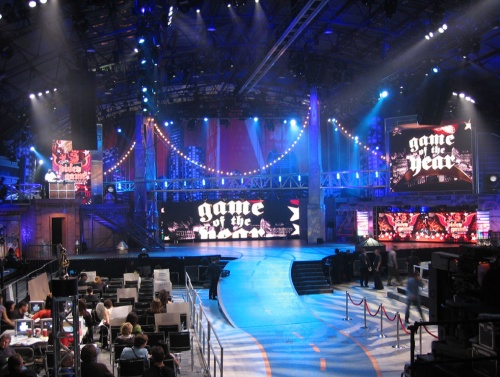 If you're allergic to rampant commercialism, you may have missed the Spike Video Game Awards this weekend. Shot in Las Vegas and covered by a number of major media outlets, the award ceremony was a balls to the wall (and trust me, I rarely use that phrase) extravaganza of hype and consumer hypnosis, which nevertheless promises to do as much for the game industry in moving it toward the mainstream as we could ever hope from a televised awards show.

Unfortunately, however, it will not disprove the theory that videogame makers are dysfunctional, juvenile, pre-adolescent ingrates with severe testosterone imbalances. In typical Spike TV style (I mean, come one, it's on Spike TV, FFS), the event was full of rock 'n' roll, celebrity worship and the glorification of excess. As one colleague put it, it's hard to be critical of an event willing to fly you to Las Vegas, put you up at the Wynn and roll out the red carpet. Fortunately I wasn't there, so I can be as critical as I want.

Another theory the VGAs will not disprove is that gamers are suckers for the new, shiny. Our own Executive Editor was selected as a judge for this year's awards, and in reviewing the list of nominees with her one remarkable fact leapt out at us: Many of the games nominated hadn't even been commercially released. And the majority of them had only been out a short time.

Granted, this is a busy time for game releases, and as Kyle Orland aptly pointed out in this week's issue of The Escapist, most games come out this time of year, which, as far as my way of thinking goes, makes it an odd time to offer awards unless one's intent is merely to add to the marketing glare. (And as far as the VGAs are concerned, I'm not entirely certain it isn't.) One should hope for a window, or a cut-off point, during which, or after which, games are eligible for review. Or at the very least to not award games that had been on the market for less than a month. Instead, as far as the VGAs are concerned, it would appear any game that's even been talked about can win an award. I'm surprised Duke Nukem Forever didn't take home something.

While it's true game journalists (and the majority of the judges for this year's events were, in fact, game journalists) often receive their review copies well before a game ships to retail, it just seems somehow seedy that ballots were being passed around - and winners chosen - before anyone could legally purchase some of the games in question. Before some of the review copies had even shipped.

Let's take Spike's "Best RPG," Mass Effect. This is a game that takes roughly 40 hours for the full experience, and while it's not necessarily necessary to play it for 40 hours to give it a fair review, I would suggest it's necessary to play it for at least that long in order to call it the "best RPG." There have been a lot of other RPGs released this year, many of them obscure Japanese titles for the PS2, but they were released this year, and they are RPGs. Is Mass Effect better than all of those games? I don't know because I didn't play them, but I'm hoping someone on that panel did, otherwise Mass Effect, while certainly a great game, can't in all seriousness be called the "best." "Newest" may be more apt. It was released about two weeks before the awards ceremony.